Mustangs going at it hard with rigorous summer workouts 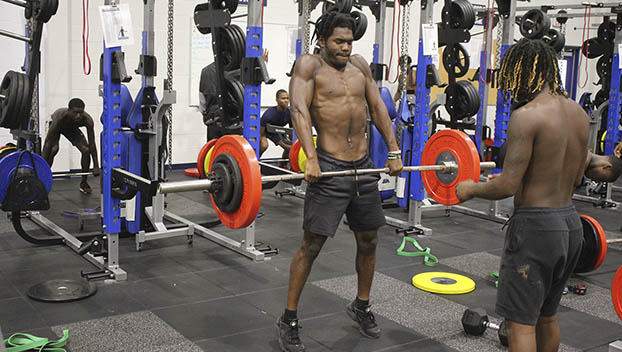 West Orange-Stark’s Jailen Brown has been working hard in the weight room in the summer workout program as the Mustangs are on a quest for a 12th straight district title. (Van Wade/Orange Leader)

WEST ORANGE – Another summer and another strong workout program for the West Orange-Stark Mustangs, who have been going at it hard as the next football season approaches.

First-year Athletic Director and Head Mustangs Football Coach Hiawatha Hickman is feeling great about guiding the hungry Mustangs as they look to continue a wonderful tradition.

The Mustangs have several streaks to keep alive. They have won 11 straight district crowns and have been to 10 out of the last 11 Class 4A Region III Division II Championships. And, of course, no one can forget those four straight trips to the Class 4A Division II State Championship Games that included a pair of state titles: 2015 and 2016.

“The kids are doing a super job getting out here so far during the course of the early part of the summer,” Hickman said. “These guys, they know what it takes to be winners and they are working their tails off to uphold an amazing tradition.”

The Mustangs have things broken down in time frames that are worked really well.

“We have the lineman coming in here at 9 a.m., then the skill people come in at 10 a.m. and then the girls come in at 11 a.m.,” Hickman said. ‘They all spend an hour working with Strength & Conditioning Coach Cory Bell. Man, what a hire he has been.”

With Bell, the Mustangs are using a more CrossFit training system, something that is new to the program. The Mustangs seem to be thriving.

“What Cory has brought in has been amazing,” Hickman said. “It’s a different style of training and the kids are getting a ton of reps, bouncing from one station to another. They are loving it, and you can certainly tell by the way they are looking. They all are making great strides.”

Approximately 40 lineman work out in the early session, followed by 55 skill players in the second session.

“We’ve never had this many linemen out here, and those positions are something we have been short of as far as depth goes over the years,” said Hickman. “A lot of them are young, that’s for sure.”

Hickman expects some seniors to stand up and take the leadership roles to guide the offensive line group.

“We’ve got some guys that know what it is all about,” Hickman said. “Davin Heard and Andrew Wilson, those two seniors are ready to step up and lead the way. It wasn’t long ago they were looking up to some top-notch upperclassmen, and now they are ready for that role. Those two have really been pushing our younger ones hard. They know what it is like in the trenches on Friday nights, and the younger kids are certainly listening to what they have to say.”

The Mustangs are not just staying busy in the weight room, they spend an hour a day at Hooks Stadium, working on their skill sets.

“Man, it was such a blessing when the UIL starting allowing the schools to do that during the summer workouts,” Hickman said. “Linemen get to work on their blocking techniques, the skill guys are able to get into a flow.

“We like getting these guys out here and working up some sweat, Monday through Thursday. They get their break on Fridays, and they’re right back at it the following Monday. We’re all proud of how much work and dedication they are putting in. But, that’s what Mustangs have always done.”