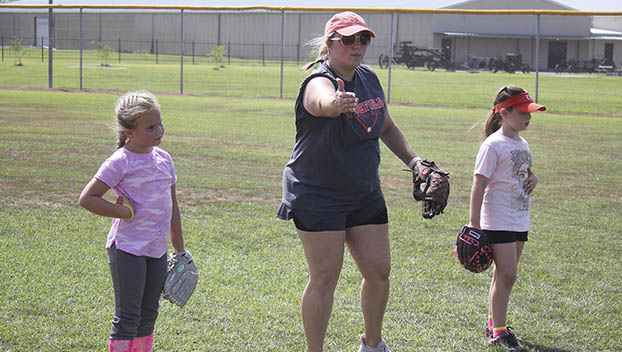 ORANGEFIELD – It was definitely a muggy and balmy Orangefield Lady Bobcats Softball Camp this week, but it certainly didn’t stop the kiddos from learning so much about the game.

“It’s been an awesome group,” said Lady Bobcats head coach Rebekah Ragsdale. “They really have so much fun. They all really take it serious, even the youngest ones. tThey brought their game faces out here.”

The numbers were certainly good for the camp that Ragsdale has been putting on for years and who has led the Lady Bobcats to so much success at the varsity level.

“We have a total of 55 or so, which we’re just thrilled with,” Ragsdale said. “Originally, we thought we would be divided into two groups. But, we had to rearrange our schedule plans because we were able to add a third group. It’s been a blast, and as coaches, we just love being out here with the kids. Camps like these is where it all starts for a lot of them.”

The camp is designed to adhere to all levels of skill development. Each camper was grouped according to age level, and each group was presented with a wide array of drills to challenge them in all of the basic skills of softball.

They had three stations as each camper got to work with all of the coaches along with former and current Lady Bobcats players.

Of course, the kiddos that seemed to be having the most fun, like at most camps like this one – were the little ones.

“They are so much fun because they soak up everything like a sponge,” said McPhatter. “They eat everything up that you tell them. They do like their water breaks though, but they pop right back up out of the dugout to hit the field again. Coach Ragsdale, she has always done such a wonderful job with this camp. To be a part of it the last couple years has really been special.”