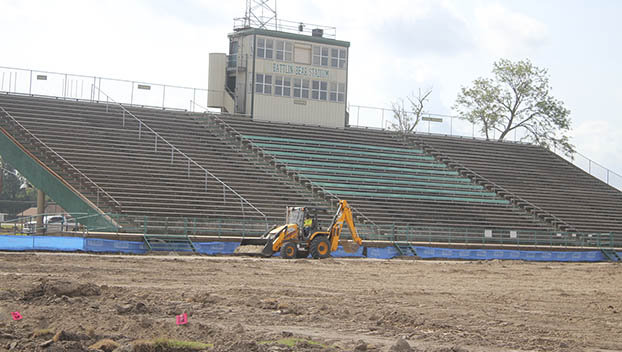 Little Cypress-Mauriceville’s Battlin’ Bear Stadium will have a tremendous new look this fall with installation of a new turf football field and other amazing upgrades as construction crews are working hard to get the stadium upgrade done by the time football season starts. (Van Wade/Orange Leader)

It’s going to be a new “feel” for Little Cypress-Mauriceville folks when they root on their Battlin’ Bears this fall with the school in the process of putting down new turf for the football field.

Three years ago, I remember how exciting it was for West Orange-Stark as the Mustangs became the first Orange County school to have the surface that is so easily maintained.

Now, Orangefield is the last remaining school in the area without turf as Vidor came after WO-S, followed by Bridge City this Spring and now LC-M in the fall. Turf may be in the Bobcats’ future, but I’m thinking Coach Smalley and the Bobcats like their grass field just as much now as ever, especially with their vaunted Slot-T offense.

For LC-M though, it’s been a long-time coming. As an LC-M graduate, I have seen the Bears play on what I always liked to refer too, as “The Swampy Marsh.”

Actually, the entire high school was basically built on marshland. That field was always so hard to maintain. Just a little rain, and the mud followed up right behind it.

And “Ditto” for the practice field as well for the Bears. Coming in August, no more football practice for the boys in green and gold in the gyms. They can hit the field running, unless, of course, there is lightning.

As a product of the 1980s, it’s awesome to see how all of our local athletic facilities have made amazing progress.

When I entered LC-M High School as a freshman, the weight room was in the corner of the old “Bear Cave.” We had to wait in line about six-deep to just do squats and bench press.

LC-M then had two more weight rooms after that, and the Bears now have a state-of-the-art weight room in the fieldhouse. Fieldhouse, I wouldn’t exactly know what we called that back in 1985. Folks would have called that a storage building these days.

It’s just not the field that will get a new look: New fencing around the stadium, better lighting to be installed for those fabulous Friday night experiences.

New bathrooms, that’s right Bears fans, new bathrooms. I’m not sure how bad the women’s restrooms were over the years, but us guys, we know how bad it was all those years.

Several thousand fans in the stands, and we know fellas, you could get about five people in the restrooms at a time.

I know there are more improvements the school is looking at down the road, including possibly making the visitor’s side the home side. Whoever designed the stadium originally must have had a cocktail or two before drawing out the plans.

For 50 years, LC-M fans have been looking directly in the sun during games. Of course, it got dark not to long after those varsity games kicked off. But how about all of those junior high and subvarsity games that start at 4 p.m. and 5 p.m.?

Changing sides would give Beard fans a little more of an advantage. It would be great to see those Lumberton Raiders fans looking into the sun soon.

Then there are the new tennis courts being installed. I remember those that played tennis for the school, including yours truly, who had to play on those old courts at the back of the school.

Remember those old septic system towers that were fenced in, dividing the courts? Remember all of the balls that were lost over that fence?

We have always wondered how many tennis balls the maintenance department collected over the years.

Now, it’s going to be “Tennis Anyone” right dab in the middle of the school parking lot behind the home side of the stadium. That’s going to be so awesome that I might even have to pick up the game again.

Many people tell me how “old school” I am all the time. I can definitely be that for sure. Two playoff teams in the UIL playoffs should still be the norm, not four. Nobody should get a ribbon past third-place at a track meet. Sorry, I’m a stickler.

But the installation of turf across the area is such a positive, and I can’t wait to see the first game played on the Battlin’ Bears turf.

However, maybe Coach Eric Peevey or Superintendent Stacey Brister will save me a big chunk of the grass from the “old” field and bring back Wanna Burger right down the road from the school on 87 again. I would love to have those old-school Steakfingers one more time.