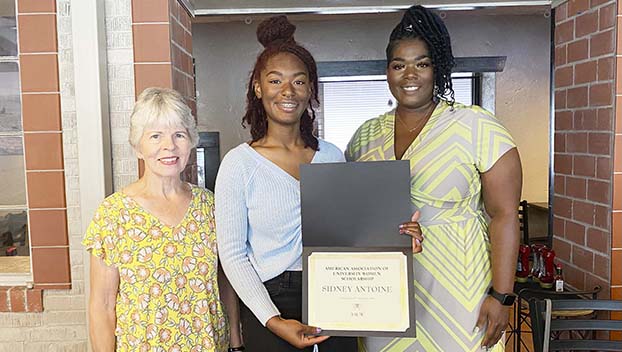 Two of this year’s high school graduates in Orange County received scholarships this week to kickstart their college careers.

Sidney Antoin, a West Orange Stark High School graduate, and Abbigail Hudnall, a Little Cypress-Mauriceville High School graduate, each received $1,000 scholarships from the local chapter of the American Association of University Women at an awards banquet at Old Orange Cafe and Catering in downtown Orange.

Antoin plans to study agriculture and animal science in the honors college at Prairie View A&M University this fall.

She already has 30 hours of college credit earned during high school.

Students applying for scholarships had to write essays on their education and how they hope to contribute to their community, said Joan Tharp, AAUW scholarship committee member.

“I wrote about how I am part of the National Honor Society, the student council, the captain of the girl’s basketball team and a volunteer within my community, as well as my church and my school,” Antoin said.

She and her mother, Latoya Williams, are grateful for the assistance to pay the cost of starting college.

She has received approxaimtely 12 other scholarships totaling $82,000, along with the AAUW scholarship, including two scholarships from Prairie View A&M, Williams said.

Antoin’s career goal is to become a veterinarian.

“So she’s gonna need it because she’s going to be in school for a while,” Williams said. “She’s a really hard worker and she’s been consistent throughout her whole education from pre-K on up. She has the tenacity to do what she needs to do to meet her goals.” 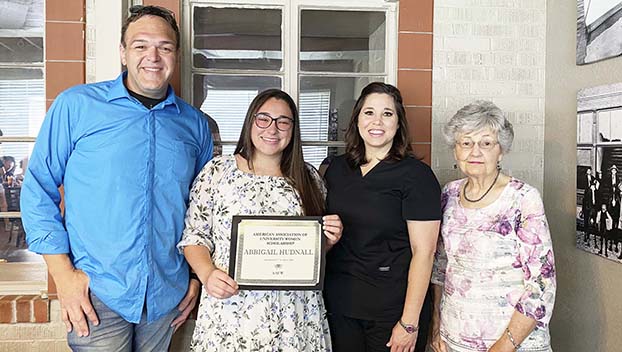 Abbigail Hudnall’s family expressed pride about her being awarded a scholarship as well.

Hudnall said her scholarship essay focused on her experiences in LCM’s high school band and powerlifting, and her charity work with Health Occupation Students of America, a school organization for students who are planning to have a career in the medical field.

“I want to go to Lamar University next fall to become a nurse and eventually I want to be a nurse practitioner,” she said. “I didn’t really get a whole lot of big scholarships from Lamar, so this is really going to help, especially with paying for books. So I’m really excited.”

Both of her parents talked about her

“We’re very proud of her and thankful,” father Michael Hudnall said. “She is probably the hardest working kid I’ve ever met, not just because she’s mine. Her whole entire life she’s been about school. Teachers have all just raved about her. She’s extraordinary — I’m very proud of her.”

“She’s a perfectionist, so everything she does, she’s going to make sure it’s done exactly right,” mother Christi Gilsson said.

Abbigail is also an active member of her church where her uncle pastors, Hudnall said.

“She’s a Godly girl, she loves church,” he said. “She’s very involved in everything.”

The Orange County chapter of AAUW has been in existence for 49 years, president Linda White said.

“One of our present members, Dolores Garcia, who is now retired from teaching, was able to become a teacher because of a scholarship that she received from AAUW,” she said.

The organization holds an annual book sale at the Lutcher Theater portico in April during Art in the Park to fund the scholarships, along with community donations.