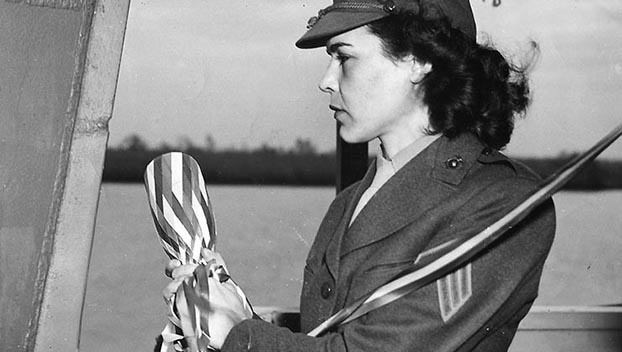 The last destroyer built by the Consolidated Steel Corporation, DD 824, the USS Basilone slid down the way into the Sabine River. The Basilone was the last of 27 Gearing Class destroyers and the last warship built in Orange as part of the World War II effort.

Basilone had been a member of the U.S. Army before enlisting in the Marine Corps and had spent time in the Philippine Islands. His frequent stories about time in Manila led to his nickname “Manila John.”

He was a member of the 1st Marine Division. They were sent to Guadalcanal in 1942.

The mission of the Marines was to attack the Japanese forces on the island and take control of the airfield, later named Henderson Field. Henderson Field was as important to the Japanese as to the American forces and the battle would be long and bloody.

On Oct. 24, 1942, 3,000 Japanese forces began a frontal attack on the position held by Basilone’s company. Basilone would go three days without eating or sleeping while the attack was underway.

He was an expert with the heavy .50 caliber machine guns and in addition to firing his gun, he went to other positions to assist those gunners and to make repairs to their guns.

Supply lines had been cut off, and Basilone made trips through the Japanese lines to obtain supplies and ammunition for his fellow Marines. Toward the end of the battle, Basilone was fighting with a .45 caliber pistol and a machete.

The Marines had virtually annihilated the entire Japanese attacking forces. There were nearly 1,000 Japanese bodies directly in front of Basilone’s company’s position.

For his heroic efforts, he was awarded the Medal of Honor.

After receiving the MOH, he was brought to the United States to participate in War Bond drives. Basilone achieved celebrity status and was pictured in the leading magazines and newspapers.

He was offered a commission as an officer and promised a permanent post in Washington D.C. Basilone refused and requested to return to active duty with the Marines still fighting.

For a period of time he was stationed at Camp Pendleton, California. While there he met Lena Mae Riggi, who was a sergeant in the Women Marines. They married on July 10, 1944.

Basilone returned to the fleet and was assigned to the 5th Marine Division prior to the assault on Iwo Jima.

On Feb. 19, 1945, Basilone was killed in an artillery barrage after he had successfully attacked a blockhouse that was keeping his unit penned down. His actions in attacking the blockhouse and later guiding an American tank through hazardous terrain under heavy fire greatly aided the Americans in penetrating the Japanese defenses and getting off of the beach.

For his actions on Iwo Jima, he was posthumously awarded the Navy Cross. 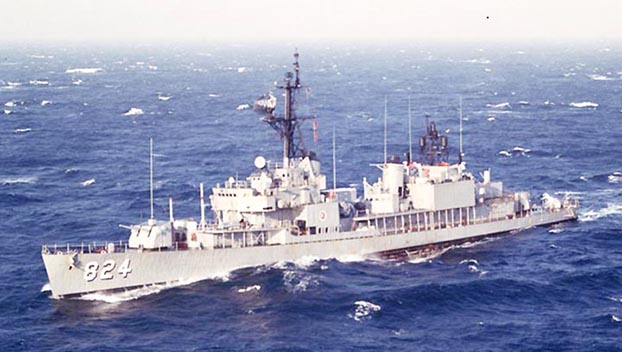 The USS Basilone DD 824 was the last warship built in Orange. (Courtesy photo)

His widow, Sgt. Lena Basilone, christened the USS Basilone in Orange on the day of the launching. Lena Basilone died in 1985. She never remarried. She once said, “Once you have had the best, there can be no other.”

With the Basilone no longer needed for wartime after her launching, she lay idle for two years. She was towed from Orange to Quincy, Massachusetts, to be converted to an escort destroyer (DDE).

The Basilone spent her career in the Atlantic and Mediterranean Oceans. Her duties would be varied, from serving as a training vessel, participating in Mediterranean operations in the 1950s, being used in anti-submarine warfare and serving as one of the ships assigned to the recovery of John Glenn’s space capsule on his return from his orbital mission.

In July, 1972, she sailed with the aircraft carrier Oriskany as part of a task force on the coast of Vietnam near the DMZ. She served as a gunfire support unit. The Basilone earned three battle stars for her Vietnam service.

Then Basilone later served three months as a goodwill visitor to Middle Eastern ports before returning to Newport, Virginia in December, 1972.

She served in various capacities as part of the Atlantic Fleet until she was decommissioned in November, 1977, and her name was struck from the Navy List.

On April 9, 1982, she was sunk while being used as a target in missile firing exercises. She lies 80 miles east of St. Augustine, Florida.