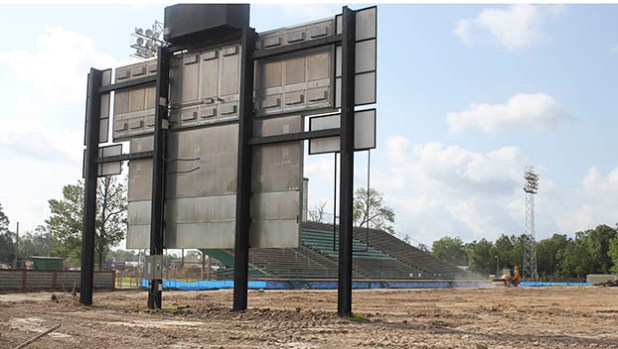 Little Cypress-Mauriceville’s Battlin’ Bear Stadium will have a tremendous new look this fall with installation of a new turf football field and other amazing upgrades as construction crews are working hard to get the stadium upgraded done by the time football season starts. (Van Wade/Orange Leader) 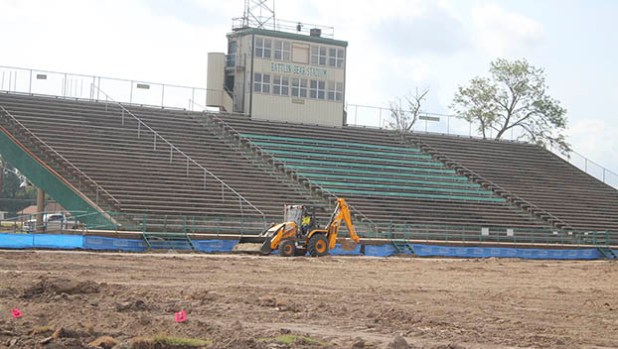 Little Cypress-Mauriceville’s Battlin’ Bear Stadium will have a tremendous new look this fall with installation of a new turf football field and other amazing upgrades as construction crews are working hard to get the stadium upgraded done by the time football season starts. (Van Wade/Orange Leader)

LITTLE CYPRESS – It’s definitely going to be a fresh new feeling for the Little Cypress-Mauriceville Battlin’ Bears and their community fan base.

After playing for almost 50 years on the swampy and hard-to-maintain grass of Battlin’ Bear Stadium, the Bears will get to play on a brand new, awesome turf field this fall.

In the early part of the Spring the Little Cypress-Mauriceville School Board approved $5 million for athletic facility improvements that included the artificial turf football field, a sparkling seven-lane track, new restrooms at the football stadium along with new tennis courts right behind the home side of the football stadium.

“The kids and the community have deserved this for so long,” Peevey said. “It’s like we’re catching up with everyone else as far as facilities go. It’s going to be something to be very proud of.”

The turf field looks to be completed close to the second week of August as the Bears will have both of their scrimmages on the road. They plan to play on the new field for real Aug. 26 in their season opener against Hardin-Jefferson.

The excitement will certainly be building as the Bears look to have the same type of success they had in Peevey’s first year at the helm in 2021. The Bears went 11-3 and marched their way to the fourth round of the playoffs for the first time since 1997.

The last sports calendar year saw almost every LC-M athletic team reach the playoffs as the overall spirit of the community really took shape, and the updated facilities can only help.

The turf use is not just about football. It will be utilized as a all-weather type of practice facility for outdoor sports like soccer, baseball, softball and track. The band, drill team and cheerleaders will also get plenty of use out of it.

“The toughest thing we have dealt with here is the ability for our teams to practice through all kinds of crazy weather,” Peevey said.

“Most of the other schools in our district have turf fields and indoor turf facilities that have been a big advantage fort hem. They continued what they needed to do, even in bad weather. Here, we were stuck in the gyms and not getting the type of work in we always wanted too. Now we can. As long as we don’t have lightning, we can always go out and practice.”

Peevey is definitely happy for the band.

“Man, those poor kids have always practiced their marching on that hot pavement in the parking lot year after year during the summers, and I’ve always had so much respect for them,” said Peevey. “It looks like they will have to gut it out one more summer, but after that, they will get to be on the new turf. I feel like it is just as much their field as it is the football team or any other sport.”

Peevey is also happy for the tennis program, as it will also get to stay on campus and practice instead of going to the Memorial tennis courts or go to Beaumont.

“We’ve always had a proud tradition of tennis here, despite basically having no facilities for it,” Peevey said. “They have played most of their tournaments in the Beaumont area or Mid County. We would love to host our own tournament next season. We’re going to have six new courts, and they are going to be awesome.”

Peevey is thrilled with the type of turf the district went with, too.

“It is considered to be highest-rated safety padding in the country,” said Peevey. “The materials can last up to 20 years, and it can keep the field almost 30 degrees cooler than what the natural grass field did. That will certainly make the kids feel better on those hot nights, especially in August and September.”

Superintendent Stacey Brister is so excited about the upcoming upgrades.

“It’s important to have facilities like this one available to the residents of Orange County,” Brister said. “It’s not just about being able to host playoff games, marching competitions or district track meets. While all that will undoubtedly increase revenue for the district, it’s important that the residents of our community have a place to use that isn’t limited by poor weather conditions the way grass is.”

The completion of the track and resurfacing of it will likely not be completed until mid-December. After that, it will be opened to the LC-M community.

Peevey is proud to say the public will be able to use the facilities like the track and tennis courts.

“We’ve always had our track open to anyone that wanted to come out here, exercise and walk or run,” said Peevey. “It used to be 24-7, but with the new upgrades, we will be shutting it down at night and it will be lights out. Same thing with the tennis courts. We will be setting certain rules to keep the facilities nice, but nothing earth-shattering. We want the community to be part of the wonderful things we are building, for sure.”