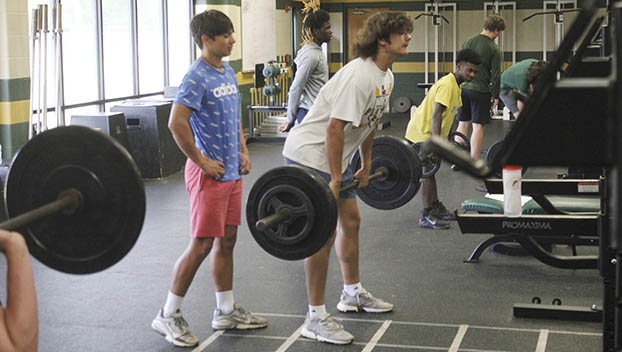 Little Cypress-Mauriceville athletes have been busy during the Bear Summer Workout Program. The program has averaged more than 400 athletes a day. (Van Wade/Orange Leader)

They started to set the tone last summer.

This go-around, Little Cypress-Mauriceville athletes are raising the bar higher in their summer workout program.

When Athletic Director and head football coach Eric Peevey arrived in Spring 2021 at LC-M, everyone could see a momentum shift with the entire Bears athletic program.

Kids showed up in droves last summer. It led to a huge success in the overall athletic program throughout the 2021-22 sports campaign, including a four-round trip to the Class 4A Region III Finals in football, the program’s furthest trip since 1997.

This summer is already surpassing turnouts from last year.

“It’s been crazy out here, and we wouldn’t have it any other way,” Peevey said. “The enthusiasm is tremendous from the kids in seventh grade on up. The numbers have been phenomenal. We’ve been averaging over 400 kids a day.”

The summer program has so many kids that it is broken down by time schedules, mainly for the weight room use.

Seventh graders use the facilities first, followed by eighth graders, ninth graders and then sophomores through seniors. The girls work out after that.

Peevey said they are averaging 45-55 kids in each seventh, eighth and ninth grade sessions, over 80 for the varsity boys and over 150 total girls for the huge numbers.

“There are so many kids, we’re already having to adjust our schedules,” Peevey said. “To get stronger and better, the summer program is where it all starts.”

“After the success they had coming up here last summer, the kids really have bought in and realized how important it is to get out here,” Peevey said. “The playoff runs, they don’t exist without these summer workouts.”

It’s all about getting in shape and bonding with future teammates.

“It’s definitely about getting in the best shape possible before the actual school year starts,” Peevey said. “It’s gets them accustomed to this Texas heat and it backs up what they all did in the offseason during the Spring. You don’t want to lose what you accomplished in the Spring. That can bring you back to the very beginning, and it’s like starting over.”

Peevey is thrilled about how the max weight lifted has gone up by an average of 40 pounds compared to last summer.

He is also thrilled about the turnout of the girls athletic program.

“Last year was good, but the girls are showing up here in droves this year,” said Peevey. “We’re so proud of what they accomplished with their teams doing so well and making good playoff runs. What we saw in further rounds of the playoffs, though, playing teams like Huffman in basketball and softball, was how strong and how much big some of those teams were and how they wore us down. I think the girls realized that, and they want to become stronger, quicker and more durable. That goes with all of the boys’ programs, too. We saw the improvement last year, and we want to make even bigger strides this year.”

LC-M senior quarterback Dean Reynolds, who was an All-District tight end last season and a stout defender, as well, loves what LC-M has done with its summer program.

“Last year we knew right then that we would have an awesome summer program,” Reynods said. “What Coach Peevey has brought in to all of us has been so awesome. The key was everybody had to buy in, and we did that. This summer, it’s like, ‘wow, what a turnout.’ You have to believe in the coaches, your teammates and everything around you. When you do that, it can lead to success.”

Reynolds feels the Bears can make another run when football season rolls around, and he’s proud to accept the quarterback challenge.

“I’ve played several positions but I have pretty much always been a quarterback since I was little,” Reynolds said. “I feel like I can step in and do really well. I’ve been getting in a lot of extra 7-on-7 work to get the full feel of it again. We had a great run last year, and our goal this year is to not only match it, but try to surpass it. We understand what kind of effort that it takes, and we’re are going to work and look to just keep getting better and better.”

The football players have been able to get in some limited skills sessions during the summer. The University Interscholastic League, a few years back, starting allowing limited skills workouts during summer workouts.

“We’ve been able to utilize our skill days every other day, which kind of breaks things up for them and have a little fun,” Peevey said. “Other than that, we’ve been lifting and running their tails off.”

And while Battlin’ Bear Stadium is currently going through the transition of installing a beautiful new turf field, the Bears have a momentous new product on their practice field. It’s been aptly called “Mount Peevey.”

“Instead of paying somebody to haul all of the dirt away from the old football field, we had it transferred over to the practice field and were able to create a tall hill for the kids to run up and down, and they have already called it Mount Peevey,” laughed Peevey. “It’s tall. and it can wear you down and that’s what we want. We had one similar at West Brook when I was there and when we were at Huffman, we saw that they did the same thing. And I was like, ‘what a great idea.’”

Peevey is definitely proud of one thing, for sure.

“Starting last summer and certainly this summer, the kids are really buying in,” Peevey said. “But the best thing is how the parents have bought in. If a kid can’t get up here, parents find a way to get them here. We like to call that the ‘Bear Family.’ Parents, that’s where it all starts.”