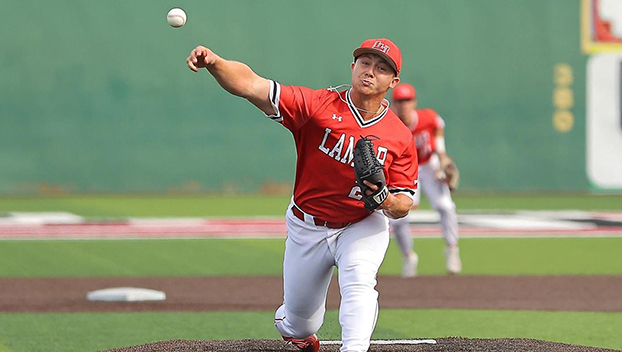 A two-sport star from the Golden Triangle, Jones has been impressing LU fans on the football field and on the track. One of the fastest athletes in the WAC (and Southland Conference during his first three years of collegiate competition), Jones is a four-year letterwinner who wrapped of his career on the gridiron with 15 starts in 34 games played, with 37 total tackles, five pass breakups and two interceptions. He was also a point scorer at the conference meet in the 60-meter and 200-meter dashes.

“Steve has represented his hometown school proudly both on and off the gridiron and track,” said Darcy. “Steve has demonstrated being the model dual-sport student-athlete from start to finish of his career. His steady and respectful demeanor make him a pleasure to work with on a daily basis. He has been a consistently loyal, humble and hard-working man that will continue to positively impact others after college as a nurse.”

A four-year letterwinner for the Red and White, Hastings played in 87 games during her career earning 41 starts. She averaged in double figures as both a sophomore and senior, while helping the Cardinals to a berth in the WAC Championships during their first season in the league.

“Angel has exemplified the qualities of the phrase ‘Lead by Example’ since her first day at LU,” said Austin St. Cyr, women’s basketball strength and conditioning coach. “Recording a career-high 29 points in only her sophomore year at LU, Angel has continued to grow over her years as both an athlete and as a leader. Her work ethic, energy, and positive impact on team morale is unmatched. She has overcome adversity time and again to become an inspiration to those she encounters. Every time she sets foot in the weight room, she is ready to push herself to her absolute limit and to motivate her fellow teammates to do the same.”

During Dallas’ career as a pitcher with the Cardinal baseball team, he has become one of the top relief pitchers in the region. As a junior, Dallas ranked among the national leader in saves, and he is only added to his tally during his final year on the diamond. The Orange, Texas native is currently second in the WAC in saves and earlier this season became the school’s all-time leader in that category.

“Jack began his career at LU as a dual-sport athlete, competing both in baseball and football,” said Travis Nicholls, LU baseball strength and conditioning coordinator. After deciding to focus his efforts solely on baseball, he quickly emerged as a leader both on and off the field. His energy, enthusiasm and ‘lead by example’ mentality have made him one of LU’s top athletes. The 2021 baseball season saw Jack earn all-conference honors, where he led the league and ranked 11th nationally in saves. As he completes his final season, not only does Jack continue to lead in baseball but also in the classroom. He is on pace to graduate with a degree in engineering. His athletic accomplishments alone are quite impressive, but the fact that he is raising a newborn daughter along the way adds a whole new level of appreciation to his endeavors.”