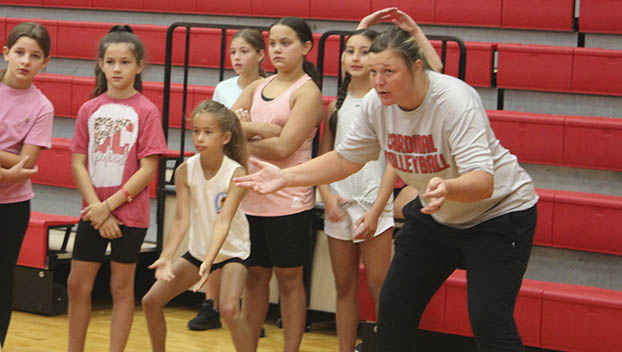 That’s always been the case of the Bridge City Lady Volleyball Camp every summer.

Especially the last two years, when the Lady Cardinals snagged back-to-back District 22-4A titles and two trips to the 4A Region III Quarterfinals. DeLuna had a tremendous run in her first year at the helm, leading the Lady Cardinals to a 39-6 mark and a perfect 12-0 record in 22-4A.

With the success , there’s always a buzz about the summer camp, especially for the little kids.

DeLuna was thrilled with the turnout after Day One.

“We had 92 that signed up to participate during the original signup and we had 12 to 15 more show up (Monday), which puts us way over 100,” DeLuna said. “We love seeing all of these new, fresh smiling faces. They are all having a blast and that’s the way we like it.”

Of course, it’s all about the fundamentals in the early phase of the camp.

“Day One we have them working on passing skills,” DeLuna said. “The next day will be about hitting and the third day is about serving and setting. The fourth day we have a lot of fun in store for them and they are going to have to just wait and see what that is.”

Of course, it’s not just the kids who are having a great time.

“I tend to work more with the little bit older kids, and Coach DeShazo, she’s at her best working with the much smaller elementary kids,” DeLuna said. “She’s like a big kid herself. She really keeps them all in stitches while teaching them at the same time.”

“I’m so excited for it, and we’ve already got a couple practices in,” DeLuna said. “We’ve got a lot of talent. It’s a tremendous honor for me. Becca Peveto nominated me after the volleyball season, and when I got the call, I was just so thrilled to get this opportunity.”

DeLuna is pumped up about coaching two of the Lady Cardinals one more time, as well.

Harlee Tupper and Caryss Carpenter are on the East squad.

Tupper is the two-time Most Valuable Player on the All-Orange Leader Team, while Carpenter made the First Team.