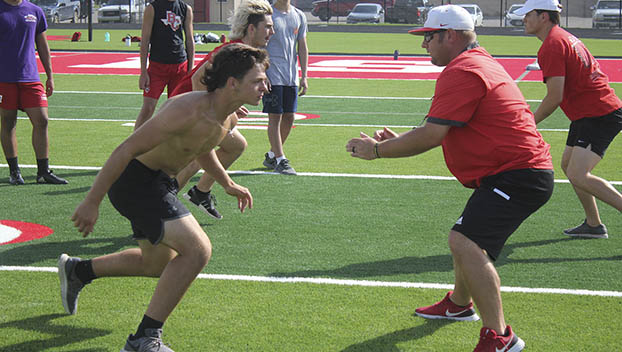 BRIDGE CITY – Spirits are running high in the Bridge City boys athletic program as the Performance Camps for the summer kicked off Monday.

The enthusiasm has been great for sure as Cody McGuire heads into his second year as athletic director and head football coach for the Cardinals.

After just notching one football win in 2020, the Cardinals quadrupled that number to four wins under McGuire’s guidance last season and hope to up the ante in the upcoming season.

McGuire is thrilled to see the turnout on the opening day.

“The turnout has been very good and it’s great to see the excitement in the kids’ faces,” McGuire said. “Of course, we want the kids to get in some vacation time with their families, but the numbers are really good early. Summer workouts are so key for every sport. It’s those couple months where they can really get stronger and faster. Plus, one of the best things is that it helps you build relationships with your teammates for the upcoming year. That’s what makes the summer sessions that much more special.”

The Cardinals are flying high, as well, with their new-look facility at Larry Ward Stadium, especially with Moe Litton Field shining with the all-turf field the school had installed.

“The kids love it, and it’s something to be so proud of,” McGuire said. “It’s so much better than what we had, and so many schools that have changed over to turf can tell you that. Ever since it has been finished, kids have been out here working out on it and playing pick-up games. I would love to thank, again, the School Board and the entire community for allowing the kids to have a top-notch field to call their own. I can’t wait for our first home game when everyone can come out and see the improvements.”

“It’s great to be out here with all the guys and working hard to get better,” Broussard said. “It’s that time of the year where you want to build yourself up and get ready for the season. You always want to go into that first official practice in the best shape you can possibly be.”

Broussard feels the Cardinals continue to make a push in the positive direction.

“You could see us get better throughout the season last year, and we won a couple close games late that we wouldn’t have won in the past because we were in better shape and on the same page,” said Broussard. “This year we want to get over that hump and have a winning season. That would be so awesome, especially with this great new field and everyone is getting pumped up.”

McGuire and his staff have a nice schedule set up throughout the summer.

The Cardinal Performance Camp runs from June 6-July 22 with one off week July 4-8.