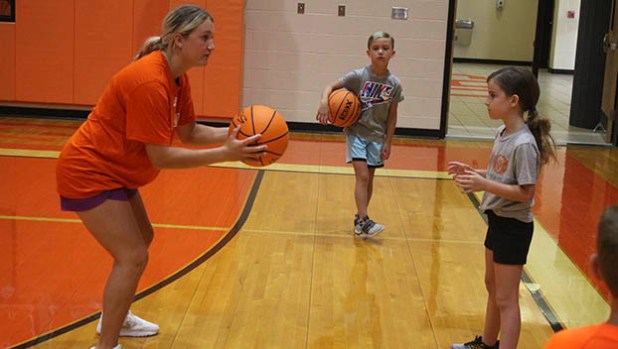 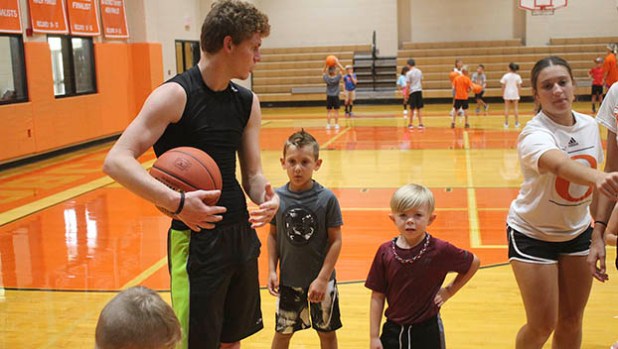 ORANGEFIELD – There was plenty of dribbling and shooting fun at the Orangefield Bobcat Basketball Camp as the school has had their biggest turnout ever.

“We have right at 100 kids and that is just phenomenal,” said McDonald. “In the past, we’ve usually averaged somewhere between 50 and 60. They are certainly keeping us running. We have some varsity girls and boys that have been instructing and they have been a tremendous help.”

The kids have been learning the basics while also getting some good games in as well.

“The first couple hours are all about ball-handling, skills and doing a lot of passing and layup drills,” said McDonald. “The last 30 minutes of each day we play a lot of fun games, especially knockout, the kids love it.”

McDonald also gets a kick at the youngest age group.

“They like to bounce around a lot and are so full of energy,” said McDonald. “They are not afraid to ask questions though. They understand they are here to learn and also have a blast doing it.”

Leyton Loft, a varsity player on the boys team, enjoys spending time with the kids.

“They are so much fun, they have so much energy and it’s hard to keep up with them,” said Loft. “I remember having that same kind of energy at their age. What’s really great, is that listen well and they pay attention to every word. I think they will all take a lot away from this experience.”

Former Lady Bobcat standout and current Lady Bobcat assistant coach Emmi Michael was on hand giving instruction as well and she remembers her experiences at the camps when she was a kid.

“I was so thrilled to get to come back here and coach where I played, last year, right out of college, I knew where I wanted to be,” said Michael. “Everyone in this community loves basketball. The kids have really bought in and are soaking in everything. I remember participating in the camps when I was a kid, sometimes it feels like it was just yesterday. But I’ve never seen the numbers like we have at this camp. Right at 100, that’s incredible.”

McDonald is also proud of another thing.

“The beauty of it is that we see so many of these young faces in the gym with their parents at Bobcat games during the season,” McDonald said. “That’s what it is all about. With their enthusiasm, we’re pretty sure we’re seeing future Bobcats out here.”