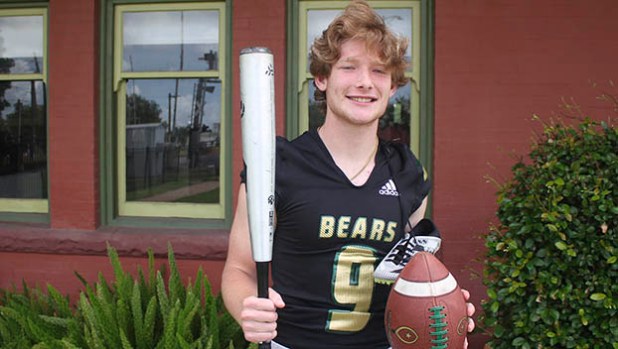 LC-M's Ashton Landry is the 2022 Orange Leader Male Athlete of the Year after a tremendous senior year. (Van Wade/Orange Leader) 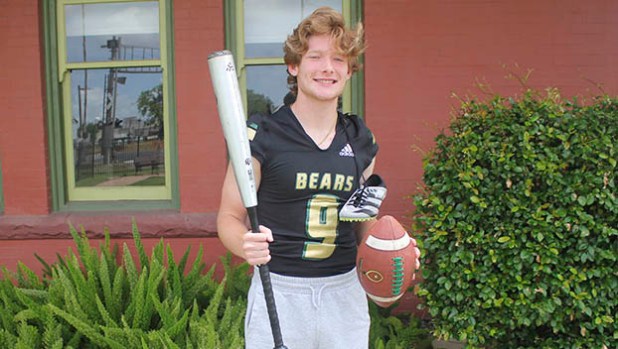 Ashton Landry made it count on the football field, the baseball field and on the track for the Bears. (Van Wade/Orange Leader) 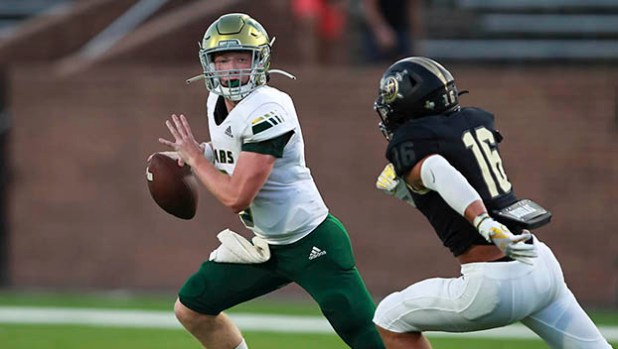 LC-M's Ashton Landry powered the Bears offense as they rolled to a 11-3 record and went four rounds deep in the playoffs. (Mark Pachuca/Orange Leader)

That’s what all athletic programs look for from their best athletes.

Those three qualities certainly describe Little Cypress-Mauriceville’s Ashton Landry, especially after the great run he had his senior year for the Battlin’ Bears.

Landry, who made All-District at quarterback and in baseball, plus was a regional qualifier in track, certainly has plenty to look back on.

For his tremendous exploits, Landry is the 2022 Orange Leader Male Athlete of the Year.

In football, Landry certainly got his feet “wet” as a junior, starting at quarterback and going through a tough 1-7 campaign.

“We were a young football team that year but we knew we had the potential and the experience certainly helped and showed where we needed to improve,” said Landry.

That changed and changed in a hurry in his senior year. Sparked by the energy of first-year Athletic Director and Head Football Coach Eric Peevey, the Battlin’ Bears turned plenty of heads, going 11-3 and reaching the Class 4A Region III Finals for the first time since 1997.

“Coach Peevey came in and changed the culture, not just in football, but in all of the sports,” said Landry. “As a team, we bought in early and I never seen such a big turnout like we had in the weight room last summer. We all became so energized and we just fed off of it.”

Landry says the best feeling he had his senior year were the crowds at the football games.

“We kept winning and the momentum kept building,” said Landry. “To see the stands packed at all of the home games, that’s just something I have never seen before at the school. The energy was unbelievable. When we got into the playoffs and seen our fans pack some of the bigger stadiums and they started all of those great chants. Those are moments that will stay with me forever.”

Led by a stout offensive line, excellent receivers along with standout running back Da’Marion Morris, it was Landry that made the Bear offensive machine go.

Landry has tremendous speed, but it was his lateral movements that juked opposing defenders, making them look silly at times, that paid huge dividends.

“Moving laterally is something I have always been able to do, ever since I was a little kid,” said Landry. “A lot of times, if you can get past that first or second defender with a move, there’s a chance you can take it all the way to the end zone.”

Landry was brilliant in the Bears’ balanced offense that churned out 380 yards a game.

“I was fortunate enough to play behind a great offensive line and then there was Da’Marion, the best possible running back you could ever play with,” said Landry. “We had good receivers too that could catch anything.”

So when did it kick in for Landry that the Bears were really good?

“We lost our second game to West Orange-Stark but we came out and played great after halftime of that game and we knew we could compete with anyone after that,” Landry said. “We beat a very good Kincaid team right before district started and our confidence just kept growing.”

The playoffs were extra special. The Bears had only won one playoff game in the past 24 years until their explosion in 2021 to the fourth round.

The Bears defeated Palestine in bidistrict 34-24 with Landry hitting receiver Keaton Rives on a huge fourth-and-17 pass that kept a crucial drive going late in that game. The Bears throttled West Columbia 42-21 in the second round and dropped highly-touted El Campo in the third round before falling short to Tyler Chapel Hill in the Regional Finals. Landry tried to give it a go against Chapel Hill, nursing a tough ankle injury he received against El Campo as he did his best to battle through it.

“We got tougher both mentally and physically when the playoffs started,” said Landry. ‘We struggled in the first half against Palestine but we got together at the half and basically said ‘Let’s go play Bear Football.’ Nobody gave us much of a chance to stay on the field against El Campo and we got it done. That was a great moment. Our crowd went entirely nuts in that game.”

It wasn’t going to be easy for Landry, the son of Amy Henry and Brandon Landry, going into his senior campaign but he battled the odds and showed his fellow teammates how to overcome an obstacle.

Landry had to miss the tail end of his junior baseball campaign after finding out he had heart rhythm issues, which is called arrhythmia.

Landry went on and had a Cardiac ablation procedure. Cardiac ablation is a procedure that uses heat or cold energy to create tiny scars in the heart to block irregular electrical signals and restores a typical heartbeat, helping patients to get back to a normal routine as quickly as possible.

“I started to realize that I wasn’t sleeping well and when I did sleep, I was constantly waking up tired,” said Landry. “We decided to go to my Mom’s hospital and found out about the irregular heartbeat and the condition and we wanted to get something done immediately. So many things were going through my head but the procedure was not that bad. I wanted to get back to getting in shape as soon as possible.”

That happened pretty quick too.

“I was cleared to start working out the next week,” said Landry. “I didn’t over do it the first week or so, but after that, I was back to normal as far as my workouts went.”

In baseball, Landry wrapped up a solid run, making the All-District 22-4A Team.

He batted .347 for the season but upped the ante in district play, batting a lofty .385.

That was despite facing an arm injury while pitching. Landry will have to have Tommy John surgery June 7. He stopped pitching after the injury but continued to find plenty of success at the plate.

At the same time he was competing in baseball, Landry was busy on the track as well. Instead of juking defenders, going left and right and full-steam ahead, Landry showed his true vertical speed in running the 100 meters.

“I loved track, and it felt funny running straight ahead,” laughed Landry. “I never actually practiced for track. I always went to baseball practice and then was able to run at the meets. We had a really good track team.”

He ran the 100 meters in 11.17 at the Area Meet to qualify for Regionals, after finishing third at the district meet, by running an 11.72. That was making great strides in a matter of a little more than a week.

After he has his Tommy John surgery on his arm, Landry said he will likely have another Cardiac ablation procedure right after that.

“It’s nothing major and I know what it is all about this time,” explained Landry. “A lot of times the doctors say there is a 50 percent chance it can come back. I want to get both things done so I can concentrate on what’s ahead.”

Landry wants to continue his football prowess and Blinn Junior College would love to get his talents.

“I plan on taking this next year off and getting my arm back in shape,” said Landry. “Football is my passion and I would love to get back on that field and Blinn says they will work with me.”

Whoever lands Ashton, they will be getting a “Heart of a Champion”.