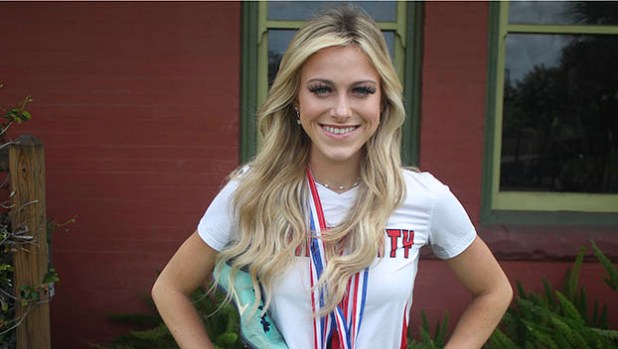 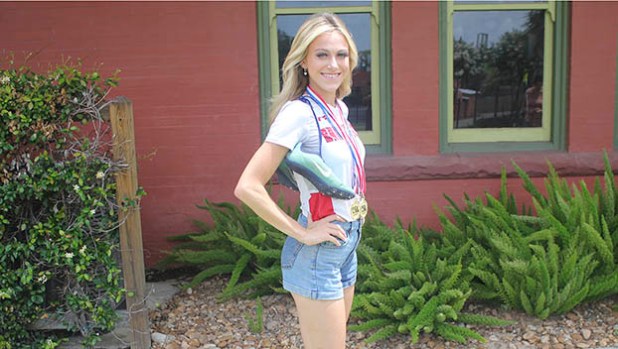 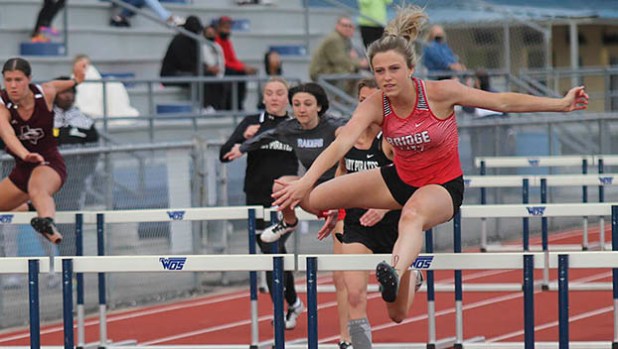 Bridge City's Caryss Carpenter flys over the 100-meter hurdles at a district meet. Carpenter holds the school record in the event, running a 14.69. (Van Wade/Orange Leader)

All great things must come to an end when it comes to setting high marks in high school athletics.

One thing for certain though, Bridge City’s Caryss Carpenter accomplished so much wearing Bridge City Lady Cardinal uniforms throughout the years and some of her marks might just stay awhile.

With a great senior campaign behind her, Carpenter has earned the 2022 Orange Leader Female Athlete of the Year.

Carpenter is arguably one of the best to put on spikes for the Lady Cardinals track program and was such a key cog in Bridge City’s back-to-back District 22-4A volleyball championships the last two seasons.

“I can’t believe it’s all over, I’m so going to miss high school and all of my friends,” Carpenter said. “Everything has been really emotional the last few weeks. After I ran my last hurdles race at State, it made me reflect a lot on the last four years, all of the friends I have made and all of the great coaches I have had and loved. Then it really hit me after Prom.”

In track, Carpenter made her mark across the board last season, competing in the 100-meter hurdles, the high jump, long jump and triple jump, plus she even found time to run a relay leg.

She went on to qualify for State in the high jump and 100-meter hurdles.

“It was such an awesome and fun season,” Carpenter said. “I’m the type of person who likes to set goals, chase them, keep making progress and keep beating personal goals. I’m really different this year, too. If I fail, I pick myself up and continue to push myself to be the best I can be, whether it’s at track, but at life as well.”

Carpenter set a new standard for Bridge City at the Cardinal Relays in Orangefield last season, running the 100-meter hurdles in 14.69 seconds, beating the old school record held by Krista Vicknair, which was 14.89 and set in 1989.

“That felt so great, because I was chasing it,” Carpenter said. “I love the hurdles and I want to consistently run under 15 seconds. I missed out last year because I stumbled. This year my goal was to shake that off and keep dropping my times.”

Carpenter went to State as a freshman in the high jump after she went 5-5 that season.

She ended up going 5-2 at State in sloppy weather conditions. Her best jump at a meet was 5-6 at the Bobcat Relays her sophomore year, but after that meet, COVID reared its ugly head and the season was canceled.

She hovered around the 5-5 mark this season but eventually reached her career-best at 5-6. Her 5-6 effort in the high jump and her 14.69 time in the 100-meter hurdles were tops in Southeast Texas this season.

“I felt I had a really good freshman year and couldn’t wait until the sophomore season but that was all wiped out with the pandemic,” Carpenter said. “I had some good moments my junior year, but it just didn’t feel right at times, and I know I could have done better. That really pushed me going into this year. My goals were so high, and I really pushed myself to the limit in trying to be the best I can be.”

Carpenter will continue to hone her track skills after inking a scholarship with Sam Houston State University.

She will be looking to thrive in something Lady Bearkats coaches are wanting her to do – the heptathlon. The competition features seven events and includes the 100 hurdles, shot put, long jump, high jump, 200 meters, javelin and 800 meters.

“That’s what the coaches there want me to do, and I think I’m going to love that challenge,” Carpenter said. “I might not be the greatest in each individual event but I can go for being one of the best all-around. I’ve always liked being in as many events as possible.”

Carpenter’s parents Jill and Roman push her to be the best she can be and are at every meet possible, offering her so much support.

“My Mom, she’s so awesome and has helped me clear so many hurdles in life,” Carpenter said. “She would jump over every hill and mountain to make sure I’m doing what I’m supposed to be doing. My Dad has pushed me, especially since the eighth grade, to get out there on the track because he thought I was fast and knew I could jump. They have brought me to individual meets in Houston and have paid for private lessons. My grandparents are awesome, too. I’m fortunate to have such a great family fan club.”

She was part of two straight District 22-4A volleyball champions on teams that went a perfect 24-0 in district play the last two seasons. She was First Team All-District and First Team on the All-Leader Team this past season.

Carpenter had 213 kills, 398 digs, 66 aces and 22 blocks in her senior campaign and certainly didn’t mind diving on the floor for all of those digs.

And another thing she is so proud of – she made the Academic All-District Team.

She gets to represent Bridge City one more time when she competes in the Southeast Texas Coaches Association All-Star Volleyball Game June 16 at 4 p.m. at East Chambers High School in Winnie. Bridge City volleyball coach Savanah DeLuna will coach the East Team, and Carpenter will be joined by teammate Harlee Tupper.

“Those volleyball runs were great, especially the one last year, being seniors and all,” said Carpenter. “The friendships and families I have got to know over the years are something I will always cherish. It’s been such a great time. Memories that will last a lifetime, for sure. It’s going to be awesome to get coached by Coach DeLuna and I’m thrilled to play with Harlee (Tupper) one more time. We’re going to practice for that game starting next week. I can’t wait to see what we can do, I believe we have one more win in us.”

Carpenter will be taking her skills to Huntsville in the future, but the moments she has made at BCHS are priceless.

“A lot of people are excited to graduate and move on,” Carpenter said. “Don’t get me wrong, I’m glad to graduate, but I will always cherish the memories I have been a part of with all of my friends, family and coaches. I can’t wait to see what I can do at Sam Houston, but I will always be a Lady Cardinal in my heart.”