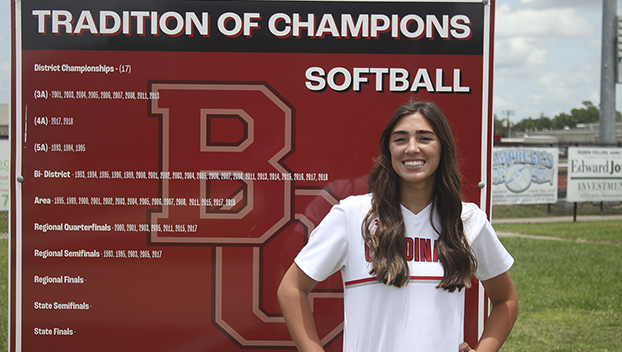 But Bridge City fans would just kick back and grin, because they know the junior-to-be flamethrower basically allows no hits at all.

After she came on the scene as a freshman last year, softball gurus around the area thought she had the right stuff. This season, they know she does. Ask any opposing batter she faced.

Fall was the key cog that made the Lady Cardinals go this season as they strolled to a 27-7 mark for head coach Raven Harris. And then there was that perfect 12-0 run to win the District 22-4A Championship. Bridge City ended up in the third round of the postseason, giving defending state champion Liberty fits before falling 2-1 in a decisive Game Three in the 4A Region III Quarterfinals.

With her great campaign she is the Most Valuable Player on the 2022 All-Orange Leader Softball Team.

“It’s such an awesome honor but it couldn’t have happened without all of the great teammates I have,” said Fall. “The season was just so awesome all the way around. We had everything working for us and to go undefeated in our district, which is always so strong, was extra special.”

No doubt, Fall posted some amazing numbers on the hill.

She notched a 23-3 record. She tossed 165 1/3 innings and finished with a 0.55 earned run average. She allowed just 55 hits and posted a whopping 372 strikeouts. She amassed 16 shutouts that included two perfect games and nine no-hitters. She also hit .323 at the plate with three home runs and 14 runs batted in.

After just two years down and two more to go, Fall is being looked at by so many college programs that her and Coach Harris can barely keep up with them.

“She was amazing all season long,” said Coach Harris, the All-Orange Leader Team’s Coach of the Year. “She just has that competitive edge to her and that feeds off to the other kids. I’m blessed to get to coach her a couple more years. She is one of those kids that you get to coach, and you could possibly only have one or two like her in a whole coaching career.”

Fall had a tremendous freshman year in helping the Lady Cardinals get to the playoffs. This year, she wanted to up the ante. She grew a couple of inches and bulked up and got stronger.

“I started to do Crossfit training last year and it really paid off,” said Fall. “It has really helped me gain strength and stamina. I was able to go all seven innings a lot last year but this season I felt so much more comfortable and I wasn’t tired and I could throw as hard in the seventh inning as I was able to in the first inning.”

Harris seen the more bulkier and confident Fall early on before the season ever started.

“One thing Carson doesn’t back down from – a challenge,” said Harris. “A lot of the college coaches, especially the bigger schools, were telling her she has to get her velocity up to 65 miles-per-hour by the time she was a senior. Well, she was throwing 61 and 62 as a freshman, which is amazing when you think about it. This year she was constantly throwing 68 and 69. She should be around 70 consistently next year.”

Fall had so many huge moments shutting opposing lineups down, but she has a couple big memories that stick out.

“The Game One win against Liberty was so big, we realized then that we could compete with them and that we had the talent to beat anybody,” Fall said. “We had a little bad luck in the last game of that series, but that only made us want to work harder and come back bigger and better next year.”

The Lady Cardinals downed Liberty 4-0 in Game One of the series as Fall allowed just two hits and fanned 14 in the shutout.

The other moment came when the Lady Cardinals and Fall bested Lumberton in the district finale 2-1 in 10 innings. Fall notched 20 strikeouts in the 10 frames.

“That game was crazy and it was the loudest game ever with all the fan support we had at home that night,” Fall said. “We were wanting to go 12-0 in district so bad and we got it done.”

Fall has had plenty of support along the way from her parents Jennifer and Lance Fall. Jennifer was one of the early “pioneers” of Lady Cardinal softball as she played for a Bridge City coaching giant in Tom Woolley.

“My parents love the game and have been right there with me the whole way,” Fall said. “From getting me to place to place as far as lessons and travel ball go and they are my favorite fans.”

Fall is fixing to have a busy summer as well between travel select ball and Crossfit training.

“I like staying busy in the summer and I have to keep trying ways to improve my game,” Fall said. “I know it’s a busy schedule but I wouldn’t do it if it wasn’t so much fun. I just love the game.”

Fall can’t wait to next season either as the Lady Cardinals return six players to the starting lineup.

“We definitely feel we are building something special and we also know that we all want to improve our games because everyone will be trying to beat us after the season we had last season,” Fall said. “We would love to go undefeated in district again and get further in the playoffs. This season we proved to ourselves we could do it. Next year, it’s all about knowing we can do it. I can’t wait to see what we can do, for sure.”