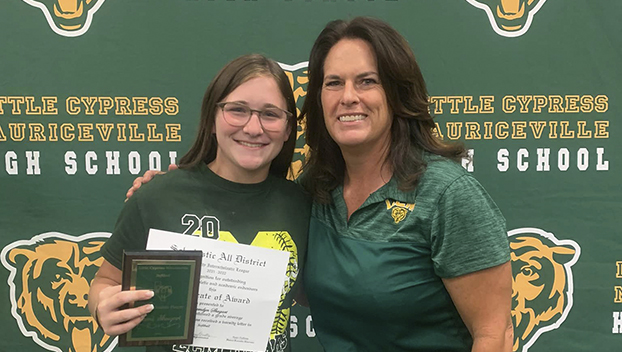 LC-M softball standout Cami Shugart will play in the SETCA All-Star Softball Game June 15. Here she is with LC-M coach Dena Adkins after winning the MVP Award for the LC-M Softball Team this past season. (Photo courtesy Michael Shugart)

The East Team will definitely have a local vibe to it.

Bridge City head coach Raven Harris will coach the East squad after leading the Lady Cardinals to a perfect District 22-4A record and a trip to the Class 4A Region III Quarterfinals.

Two Lady Cardinals will join her in Hannah Murchison and Kaylyn Dosch.

The West squad will be coached by Woodville’s Meredith Diggles.