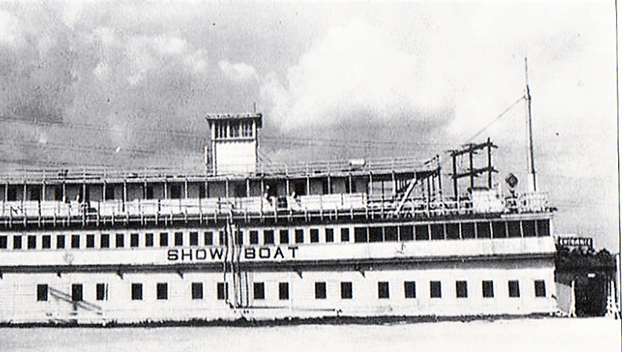 Orange was a boom town in the early 1940s as surely as Beaumont had been a boom town with the discovery of oil.

The difference was that in Orange the boom came with the building of ships for the War Effort of World War II.

Sleepy Orange was trying to recover from the Great Depression when in 1940 the contracts were awarded to start building ships for the U.S. Navy. People began to come to Orange to work in the shipyards and began to make money, lots of money.

Some workers made more money in one month than they had been making in one year previously.

When there are people making money, there are people around to help them spend it. Across the Sabine River, in Louisiana, there were a strip of night clubs, beer joints, gambling establishments and houses of ill repute. They were all there to separate the working man from his money.

From the 1930s through the 1950s, there were as many as 22 of these places on Highway 90 from Orange to Vinton. There were small places, and there were some nice clubs with dress codes and codes for behavior. The most unique of the gambling and drinking clubs was the Show Boat.

It was an actual stern wheel river boat, built by the Phil A. Rohan Boat, Boiler, and Tank Works in St. Louis, Missouri, in 1915. It was the second boat to be named “The Harry Lee.”

She was owned by the Valley Line of Memphis and ran the river between Memphis, Helena and Friar’s Point. In June 1924 she was sold to the Sherburne Transportation Company. After more years of river service, she began to be used as a barracks for soldiers at Alexandria, Louisiana, and was docked on the Red River.

In 1941 the Lee was taken to Orange to be used to house shipyard workers while housing was being built. In May 1942 there was a fire that burned a portion of the boat. By that time Orange was booming and there was money being spent, so the Lee was converted into a gambling boat.

She was 175 feet long and 36 feet wide with a shallow draft of 6.7 feet, so she was ideal to be docked beside Highway 90 and become one of the night spots of “East Orange.”

The area called East Orange was about as lawless an area as there could be. It was in Louisiana, across the river from Orange, so Texas law did not apply, and Orange law enforcement had no jurisdiction. It was far enough from Vinton and Lake Charles for Louisiana law enforcement to not take much interest in what went on at the clubs.

The newly named “Show Boat” became the roughest of the spots along the highway.

The Show Boat was flashy with a lot of outside lights and located close enough to the steel bridge at the foot of Green Avenue for shipyard workers to walk across the river after their shift ended to party and spend money. The aim of the management of the Show Boat was to get people drunk enough to spend their money on many drinks and to gamble enough to lose all the money they walked in with.

The late Murray Spector said in an interview “the Showboat was the roughest of all the places over there. If people wanted to get in trouble, you could in the Show Boat. There were even rough women. There was one they called ‘Show Boat Ruby’ and she was a terror.”

The Show Boat had slot machines, blackjack, a restaurant and a dance floor with a live band. There were also some women that would help the men spend money.

One story was told about a professional gambler from Shelby County who watched the way the games were run at the Show Boat and decided he could beat them. He recruited six of his friends to go with him one night and when he had won $60,000, he signaled his friends to come to him. They circled him and handed him a pistol, the six already had pistols.

The gambler then told the dealer he was leaving. The dealer said, “Not with our money.” The gambler and his friends pulled their pistols and said they were leaving. They then walked backwards with one man ahead looking forward.

The bouncers from the Show Boat walked behind them all the way to the door. The men with the money kept walking backwards all the way across the bridge with the front man facing forward watching for cars.

Other gamblers were not so lucky. Reportedly some winners were knocked out and their pockets emptied. It was said that when the water cleared up, from the walkway going from the dock to the boat, there were hundreds of billfolds lying on the bottom. Men would be hit in the head and the money taken out of the billfolds. The billfolds were then tossed into the water.

When the new bridge across the Sabine River was built and traffic began to use the new interstate highway, the clubs of East Orange closed.

The Show Boat was towed to Mississippi and used for a few years as a restaurant. The final fate of the Harry Lee/Show Boat is unknown, but the legend of the Show Boat is a part of the history of the “War Years” in Orange.