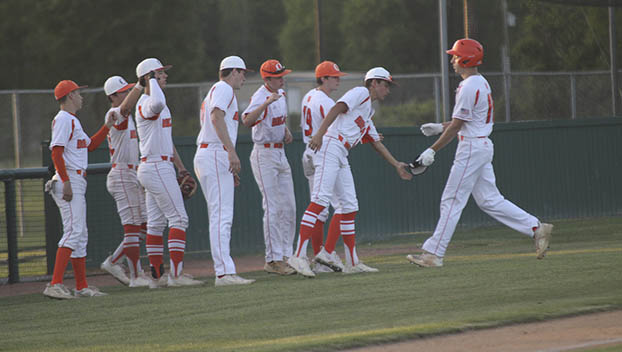 The Orangefield baseball team fell to China Spring in the 4A Region III Semifinals Thursday night. It was a great season for the Bobcats as they finished 28-4-1, won the 22-4A title, and went four rounds deep in the postseason. (Van Wade/Orange Leader)

SPRING – The China Spring Cougars continue to be “kryptonite” for Orange County teams after ending what was a superb Orangefield baseball campaign by downing the Bobcats 7-3 to win Game Two of their best-of-three Class 4A Region III Regional Semifinal Thursday evening at Grand Oaks High School.

The Cougars won Game One on Wednesday, 5-4.

The Cougars (30-8) scored five unanswered runs in the sixth and seventh innings to turn back the Bobcats.

It was another great season for Orangefield and head coach Tim Erickson as they rolled to a 28-4-1 overall record, claimed the District 22-4A Championship and advanced to the fourth round of the postseason.

The Cougars finished with nine hits while the Bobcats had six.

Marcus Rosales got the win on the mound for the Cougars, tossing five innings in relief of starter Cage McCloud. Rosales allowed just two hits while striking out three and walking one. McCloud went two innings, allowing four hits.

The Bobcats scratched in a run in the bottom of the second.

Bodin led off with a ground rule double off the wall in right field. Morgan Sampson flied out to right, moving Bodin over to third. Bodin scored after a Brennon Lecoq sacrifice fly to centerfield.

The Cougars answered in the top of the third to grab a one-run lead.

Orangefield regained the lead in the bottom of the fourth.

Kolbie Sowell had a leadoff double to right and courtesy runner Kane Smith advanced to third on a Bodin groundout. Sampson then tied the game up, plating Smith with a RBI double. Lecoq moved courtesy runner Brayden Babin to third on a ground out. Babin raced in to score on a wild pitch to give the Bobcats a 3-2 edge.

China Spring regained the advantage with three runs in the top of the sixth.

JC Hughes opened it up with a leadoff double past first base. Kolby Killough reached on an error and Hughes got to third. Hughes scored to tie it after an errant pickoff attempt. Trevor Black put the Cougars ahead when he brought in Killough with a RBI double. Dean Hannah moved Black to third with a sacrifice bunt.

Jase Garrett reached on a fielder’s choice on a bunt as Black was thrown out at home. Faulkner made it 5-3 when he slapped a RBI double to right to score Garrett.

The Cougars added some insurance runs in the top of the seventh.

Trace Necessary had a leadoff triple and scored on a RBI double by Bryce Tabor to make it 6-3. After Black drew a two-out walk, Hannah drove home Tabor with a RBI single.

The Cougars now move on to face either Carthage or Bellville in the Regional Finals next week.