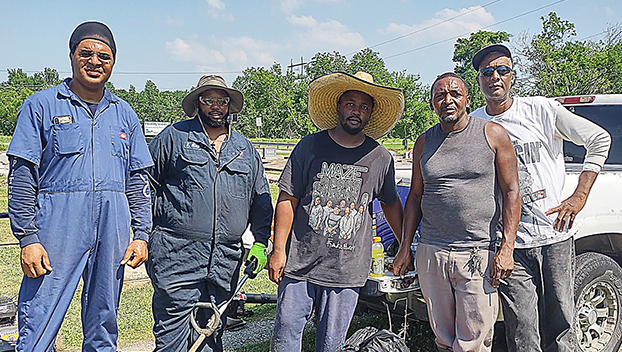 What began as a message on social media resulted in a service project this month that included more than 30 volunteers from Hollywood Cemetery’s local and surrounding communities.

Citizens of Orange hailing from diverse racial, cultural and socio-economic backgrounds spent the day working together to restore, beautify and remove safety hazards from Hollywood Cemetery.

Community member Marvin Edwards is appreciative of the help with cemetery maintenance. Although his relatives are not interred on Hollywood’s grounds, Edwards has volunteered lawn care services on the grounds for the past nine years.

“I felt great about it,” he said. “I don’t have anyone out there, but I care. There is a lot of history in that cemetery.”

He feels a responsibility as a community member to care for the grounds and the people who are there because it is community-owned.

The historical significance of Hollywood was not lost on those who participated in the service project. A historical marker noting the cemetery’s significance in Texas history was erected in 1998.

Hollywood, formerly known as the “Colored Cemetery,” dates to the Reconstruction era according to the Texas Historical Commission.

Responsibility for Hollywood Cemetery maintenance falls to the Hollywood Community Cemetery Association. Many association members have passed on or are unable to participate in restoration projects, which explains the need for volunteer support. 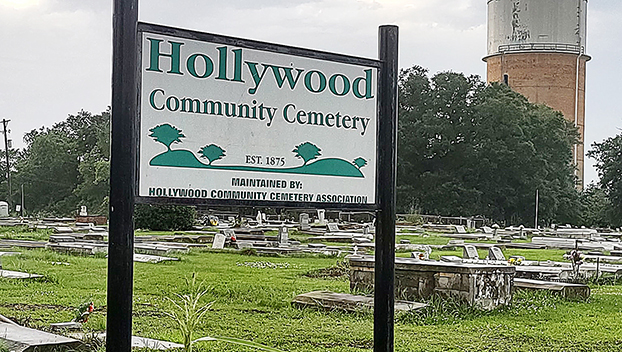 Hollywood, formerly known as the “Colored Cemetery,” dates to the Reconstruction era according to the Texas Historical Commission. (Terri Salter-Turner/Special to The Leader)

The community’s effort to clean up the cemetery was appreciated by community members and relatives of those who are interred in Hollywood.

Georgia Noone Sherrod of Baltimore, Maryland, and grew up in Orange, has four generations of family members resting in Hollywood.

“Hollywood is a holy and sacred space, where our history and the history of our forefathers are laid to rest, and it should be preserved as such,” Sherrod said.

According to her, the upkeep of the grounds is consequential work. She extends thanks to volunteers for showing such respect and reverence for those who have passed on.

Volunteers worked directly and indirectly to support the clean-up of the cemetery.

Some citizens provided cold drinks and snacks to workers as they toiled in harsh conditions to tend to the lawn. Workers used their own lawnmowers, weed eaters, leaf blowers and gas to complete the work.

Volunteers removed ant beds, bagged refuse, cleared walkways and provided safe passages for any who wish to visit with loved ones and lay flowers. Community members are now able to safely do this without concern for snakes, ants or other hazards.

The grass is shown mowed at Orange Community Cemetery, which was first established in 1875. (Terri Salter-Turner/Special to The Leader)

Kevin McDonald, whose desire to beautify the final resting place of his mother prompted the May 4 project, had this to say regarding the day of service,

“I felt good because something was done,” he said. “I was excited just to see us all come together as one. It was overwhelming for me. We had White Americans, Mexican Americans and Black Americans all working together, as one. I just want to thank everyone who came and worked, especially those who donated.”

City Councilwoman Terry Salter-Turner of District 3 helped donate materials and work the grounds to show respect for those who passed on.

When considering the project in total, she related that it was an example of the City of Orange working together towards a common goal.

Members of The Hollywood Community Cemetery Association told Orange Newsmedia they sincerely appreciate the efforts undertaken May 4 by volunteers and hope it reflects a turning point for the official Historic Texas Cemetery.

Many of the board members have passed away or are unable to serve in a direct capacity. All community members interested in serving in the future are invited to meet on the grounds of Hollywood every Fourth Saturday of the month from 8 a.m. to noon. The 4.75-acre cemetery is located between West Turret Street, Simmons Drive, West Curtis Street and Mill Street in District 4 of the City of Orange.

Those seeking further assistance with the upkeep of the grounds of Hollywood Cemetery may contact the Texas Historical Commission Cemetery Preservation program at 512-463-5853.