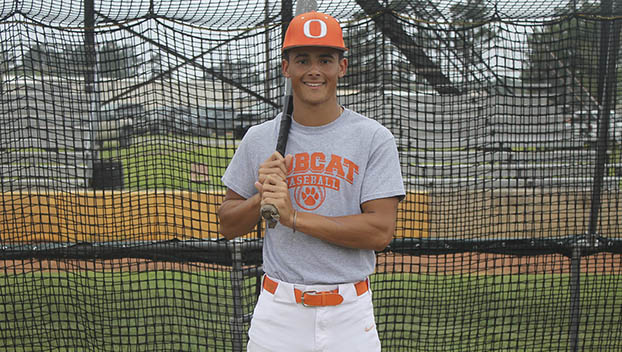 Orangefield’s Kameryn Henderson has been a huge spark as the leadoff hitter for the Bobcats lineup as they prepare for Round Four of the playoffs. (Van Wade/Orange Leader)

ORANGEFIELD – To battle for a district title and a deep run in the postseason, successful baseball teams need a top-notch lineup one through nine and superb pitching depth.

And then there is that other thing that comes to mind – a table setter.

The District 22-4A champion Orangefield Bobcats have been automatic there the last three seasons.

Senior outfielder Kameryn Henderson has been the sparkplug who has made the Bobcats engine go, batting in the leadoff spot.

As a senior, Henderson is carrying a lofty .480 batting average and a mind-boggling .591 on-base percentage.

A three-year starter for coach Tim Erickson, Henderson has a career ,443 batting average and a .537 on-base percentage.

“We look at those numbers and we always wonder if they could be really real,” Erickson said. “Kameryn is so great at the plate and pitchers just have such a tough time getting him out. And when he gets on the bases, he can be trouble. He’s the type who can turn a single or a walk into a triple, eventually, with his base-running skills and his ability to steal.”

For Henderson, it’s just been a bunch of hard work and playing alongside a great group of guys who motivate him.

“Battling leadoff, I know I need to go out there and set the pace for us early and give us a spark,” Henderson said. “When I get on base, I feel like I can score from anywhere. I’m always looking for good reads on the pitcher and the guys in the field to see what my next move is.”

There is no doubt, Henderson flashes some speed while motoring around the diamond.

“In our last series against Livingston, Kameryn scored on a passed ball from second base,” Erickson said. “By the time I turned my head around coaching at third base, he had already whizzed by me and was headed for home. He’s just got the knack of everything that goes on around him.”

Henderson is certainly proud of everything the Bobcats (28-2-1) accomplished this year, winning their second straight District 22-4A Championship and reaching the Class 4A Region III Semifinals again.

The Bobcats are gearing up to face China Spring (29-8) in the Regional Semifinals this week.

“It’s great to be in the fourth round of the playoffs, but we want more,” said Henderson. “We’re so close to going to State, so why not us? I know we have the team that can get there.”

So what has made the Bobcats so special?

“We got a lot of experience with the good run we had last year, which was a big plus,” Henderson said. “What really makes us tough is that everyone contributes in the batting order. The bottom part of the lineup has just as many big hits in the last couple series as the top. There are no easy outs when it comes to us. Then you look at our pitching and how deep we are there. We just have a complete team.”

And you also can’t forget about the Bobcats’ grit.

“We’re a team that has a lot of fight,” Henderson said. “We may not be the biggest team or the strongest team but we always bring that scrappiness and heart. Coach Erickson has told us that so much and that’s what really counts. We all get along as a team and we all have the same goals.”

Another item that makes Henderson gleam. The Bobcats have been stout against Class 4A teams in district play and in the postseason. The Orangefield athletic program will make the move back down to Class 3A in the next school year.

“That is so awesome, to go up against the ‘big guys’ and come out on top like we have the last couple years,” gleamed Henderson. “From what I understand, we were the smallest Class 4A team in the state that made the playoffs, and here we are. It’s something to take a lot of pride in. We just dig in and play with all we’ve got, that’s just what we do here.”

Henderson has had some great individual moments , but his favorite memory thus far this season is something a teammate did.

“When Kolbie Sowell hit that walkoff three-run home run against Navasota in Game Two in the second round to keep us from playing a third game, that was the most awesome thing I’ve ever seen,” said Henderson. “It was such a special moment, and I was so proud of him. Kept us from playing late into the night too.”

Henderson will continue his baseball talents at Lamar University next season after signing with the Cardinals.

Henderson is also an avid fishermen. Henderson and teammate Tyler Shearin, who usually bats in the No. 2 hole, have won many awards fishing in area high school tournaments across the region.

“It’s going to be great after the season is over and I can go fishing more, because I’m an avid fishermen, and then get ready to play at Lamar,” Henderson said. “Lamar really has had a great season this year and are the No. 2 seed in their (WAC) conference tournament this week. I really look forward to playing for them. But the only thing on my mind right now is winning as a Bobcat. It would be so sweet to wrap up my last season in Austin, and I think we have as good a chance as anybody. I love all of these guys and we’re going to make a run at it.”