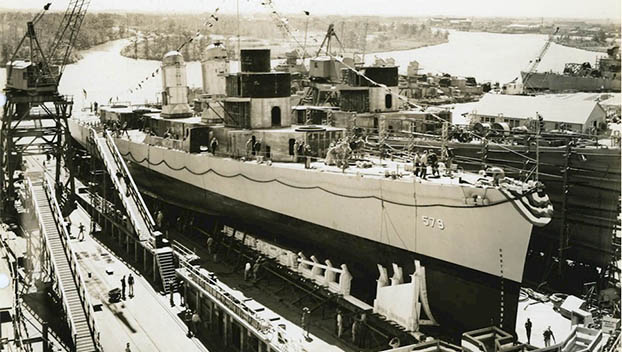 The U.S. Navy destroyer USS William D. Porter (DD-579) before her launch at the Consolidated Steel Corporation in Orange on Sept. 27, 1942. Another five Fletcher-class destroyers are either under construction or fitting out in the background. (Navsource.org)

At one period of prosperity with the “timber barons” making millions in Orange, Green Avenue had more millionaires living on it than any other street in any other town in America, based on a percentage of population.

Orange had the only shipyards in Texas that built fighting warships in WWII. Consolidated Shipyard built destroyers and destroyer escorts.

Levingston had contracts to build seagoing rescue tugs for the Royal Navy. Weaver Shipyard built wooden minesweepers. There were other Texas shipyards that built cargo and auxiliary vessels.

There is a monument to five unknown Confederate soldiers who are buried in Evergreen Cemetery. They died while encamped near Orange and were never identified.

Antonio Lopez de Santa Ana may have spent a night in Orange County. The caravan that was transporting him to Washington D.C. at the request of President Andrew Jackson crossed Cow Bayou at the crossing on Will Winfree’s land. Santa Ana did, at least, pass through Orange County, crossing the Sabine River at Ballew’s Ferry.

The last Smoothcoat Fox Terrier to win Best of Show at the Westminster Dog Show in New York City was Sabine Rarebit of Sabine Kennels in Orange. The kennels were owned by Frederick Farwell. Farwell lived in the house that later became the Little Mexico restaurant. He started as a clerk with Lutcher and Moore Lumber Company and eventually became vice president of the company. He was nationally known as a breeder of Smoothcoat Fox Terriers and was also a respected judge at major dog shows. The year Sabine Rarebit won was 1910.

Riverside was the largest housing project of its size ever undertaken by the U.S. government. The housing was only expected to last about 10 years. It actually lasted more than 30 years. There was no steel reinforcing the concrete streets. Water and sewer lines were laid on the ground and sand from the river pumped over them to make the land for the houses. The houses in “Riverside Addition,” added later on the north side of the original housing, only had sheetrock outer walls, painted with rubberized paint, as well as sheetrock inside walls.

Navy Park was built for the influx of naval personnel that would be coming to Orange during the war years. It was unique construction with all inner structure being steel. Navy Park was listed on the National Register of Historic Places in 1988.

The little log cabin that sat for several years off of Simmons Drive until it was demolished was the first Texas Highway Information Office opened in the state. It was originally built near the intersection of Mill Street and Green Avenue in 1936 and opened as part of the Texas Centennial celebration.

First Presbyterian Church was built in 1912 as a memorial to the Lutcher family. It was the first air conditioned public building west of the Mississippi River. No one knew the total cost of the building because Mrs. Lutcher kept tight control of all building costs. All bills from all contractors were submitted directly to her. It was her gift to the people of Orange.

Though the air conditioning system of the Presbyterian church was designed by Willis Carrier, it was not a “Carrier System,” as is sometime thought. Carrier was an engineer for the Buffalo Forge Company. Some of the old gauges on the system in the church basement today were installed by Buffalo Forge Company. They may be seen with the labels still intact. Carrier did not start his own company until 1921.

Mrs. Lutcher also gifted the city the Frances Ann Lutcher Memorial Hospital. She was concerned about the number of injuries in the sawmills and wanted to provide good health care. As a result, Orange had one of the most modern hospitals of the time. One innovation was the installation of a lighted operating room. Prior to the installation of the “No-Shado Light,” the only light came through skylights. No operations could be performed at night or on cloudy days.