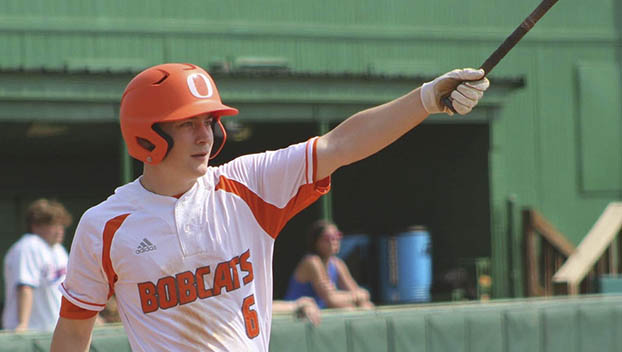 Orangefield’s Brennon Lecoq had a big night at the plate for the Bobcats, driving in four runs against Livingston in Game One Thursday night. (Courtesy photo)

PORT NECHES – It was quite the outing for the Orangefield Bobcats in Game One of their best-of-three Class 4A Region III Quarterfinals battle against the Livingston Lions Thursday night at Port Neches-Groves High School.

The Bobcats cruised to a decisive 12-6 victory as Coop Longron got the complete-game victory on the mound.

Longron scattered 11 hits while striking out eight with no walks.

Game Two of the series shifts to Cleveland High School Friday at 7 p.m. Game Three, if necessary, will be back at Cleveland Saturday at 4 p.m.

The winner of the series will face either China Spring or Rusk in the Regional Semifinals next week.

The Bobcats got a quick early run in the top of the first inning. Lamar University signee Kameryn Henderson blasted a leadoff triple off the centerfield wall. He was able to race home on a passed ball.

Orangefield racked up two runs with two outs in the bottom of the third. Kolbie Sowell got it going with a single, followed by a Jason Bodin single. Trent Eaves walked to load the bases and Lecoq came up huge with a two-run single to right centerfield.

The Lions snared four hits in the top of the fourth inning to score a pair of runs. Ruiz slapped a one-out single past short and swiped second. Josh Smith reached on a single and Caden Vickery smacked a RBI single to right. Jordan Bush made it 3-2 with a two-out infield RBI single.

Sowell, who ended the Navasota series in the Area Round with a walkoff three-run home run blast to aid the Bobcats to a 8-6 Game Two win, came through again in the bottom of the fourth as the Bobcats clawed their way to two runs once again with two outs.

Kyle Michael was hit with a pitch with two outs and Sowell made Ruiz and the Lions pay with a two-run home run bomb to make it 5-2.

The Lions retaliated with two runs in the top of the fifth after two outs. McNeal had a leadoff infield single. With two outs, Ruiz got a base hit and Josh Smith singled over third to load the bases. The Bobcats then had Smith in the hot box between first and second but Smith made it to second safely before the tag and McNeal scored and then Ruiz scored on a throwing error to trim it to 5-4.

The Bobcats answered in the bottom of the fifth. Hathaway entered for Ruiz on the mound. He walked Trent Eaves and hit Lecoq with a pitch. Caleb Fregia moved the runners over with a sacrifice bunt, Henderson was intentionally and the Bobcats ended up scoring on a wild pitch to go up 6-4.

Lion reliever Lane Ward came in for the Lions in the bottom of the sixth and had some location problems as the Bobcats sent 10 to the plate to score six runs. He hit Michael, Sowell and Eaves with pitches to load the bases and Lecoq responded big again, slapping a two-run double to right to make it 8-4 and the Bobcats then scored on a passed ball. Fregia drove in a run with a sacrifice bunt and Henderson made it 11-4 with a ground rule double and Tyler Shearin upped it to 12-4 with a RBI single.

The Lions scratched in a pair of runs in the top of the seventh. Gage Morris had a leadoff double and Ruiz and Josh Smith followed with RBI hits. Ruiz and Smith each had three hits for the Lions.