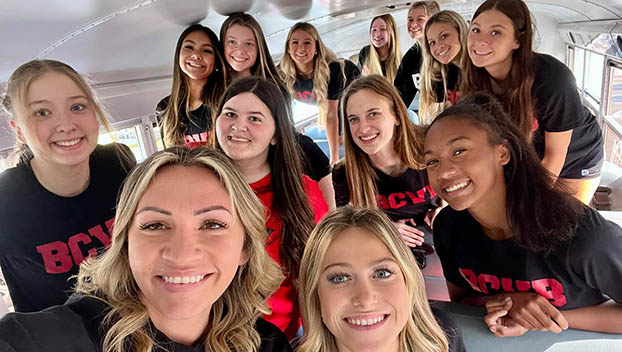 And it is going to continue for her as she will be guiding the East Volleyball Team against the West in the Southeast Texas Coaches Association All-Star Volleyball Game.

“I’m so excited for it and can’t wait to get a couple practices in,” DeLuna said. “We’ve got a lot of talent. It’s a tremendous honor for me. Becca Peveto (the former long-time Bridge City volleyball coach) nominated me after the volleyball season, and when I got the call, I was just so thrilled to get this opportunity.”

The SETCA Volleyball All-Star Game is June 16 at 4 p.m. at East Chambers High School in Winnie. That big matchup will be followed by the Girls then the Boys Basketball All-Star games.

DeLuna is also excited to return a favor to a long-time coaching friend.

“I asked West Brook head coach Talon Morgan to assist me with the team,” DeLuna said. “I came to Bridge City from West Brook last year after serving as her assistant. She coached the East All-Star Team a few years ago and she let me help her then. She’s so awesome and I look forward to working with her again.”

DeLuna certainly deserves the honor. After all, she helped lead the Lady Cardinals to a 39-6 overall mark, a perfect 12-0 in District 22-4A play to win the crown, and a trip to the Class 4A Region III Quarterfinals.

“I must admit, I felt some pressure coming in here because where I had been before, we were always trying to build a program,” DeLuna said. “Here, volleyball is such a tradition and I didn’t want to come in and mess it up.”

DeLuna soon found out, she didn’t have much to worry about.

“I walked in here knowing that I was working with a lot of talent,” DeLuna said. “I tend to be strict with rules, but the kids bought in, especially after the first couple of weeks. We took off from there. It was a great, great season for sure.”

DeLuna is pumped up about coaching two of the Lady Cardinals one more time, as well.

Harlee Tupper and Caryss Carpenter are on the East squad.

Tupper is the two-time Most Valuable Player on the All-Orange Leader Team, while Carpenter made the First Team.

Tupper is taking her talents to Southeastern Louisiana University to play beach volleyball, while Carpenter is heading to Sam Houston State to participate in track.

“Oh goodness, I love those two kids,” said DeLuna. “To coach them one more time is going to be so awesome. To come here and have those two in the program was such a big plus. I can’t wait to see what they do on the collegiate level. Two super kids right there, for sure.”