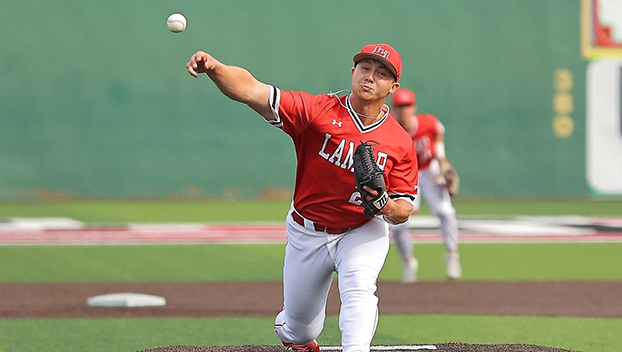 West Orange-Stark product Jack Dallas added another school-record at Lamar, setting the all-time appearance record for the Cardinals and notched a save as well Sounday against Abilene Christian. (Photo courtesy Lamar Baseball)

The effort was good for his 11th save of the season, as the Cardinals defeated Abilene Christian, 7-4, Sunday afternoon at Crutcher Scott Field to sweep the series.

The Cardinals improved to 33-19 (.635) on the season and 17-10 (.630) in Western Athletic Conference play to sit alone in second place in the league’s Southwest Division.

Lamar is just two games back of Sam Houston with three games remaining.

The Cardinals scored their seven runs on 12 hits with six different players recording a hit Sunday, and five different Cardinals finishing the day with multi-hit games. Senior Matthew McDonald led the Cardinals with a 3-for-5 effort with a double, two RBIs and a run scored.

Kevin Bermudez and Reese Durand each went 2-for-4 at the plate, while Kelby Weyler and Josh Blakenship each posted 2-for-4 efforts. Blankenship ended the day with a double and two RBIs to go along with a walk and a run scored.

Joe Buckendorff got the start Sunday and gave the Cardinals 2.2 innings of work allowing just two earned runs on five hits. He exited in the third inning with the lead and turned things over to Jacob Ellis who also went 2.2 for the win (1-1).

The Cardinals used four pitchers Sunday with Dallas picking up his school-record tying 11th save of the season.

For the third-straight day, the Cardinals jumped on the scoreboard first plating a two-out run in the top of the first. Durand got things started with a double to left center.

McDonald then dug in to line a 2-2 pitch right back up the middle to plate Durand. After a Buckendorff hung a zero on the board in the bottom half of the frame, the Cardinals were right back at it in the second – again with two outs.

With a runner on third, Kirkland Banks hit a fielder’s choice to short scoring Blankenship from third. The two-out run gave the Cardinals a 2-0 lead heading into the bottom half of the second.

The Wildcats threatened in their half of the inning opening the frame with a walk and a single, but Buckendorff got Hunter Gieser to flyout to center and Bash Randle to ground into a 6-4-3 double play to end the inning.

Big Red doubled its lead with two runs on three hits in the third, as Bermudez led off the inning with a triple to left. After Chase Kemp got hit on the very next pitch, the Cardinals had runners at the corners with no outs.

LU got an insurance run in their half of the eighth. With the bases loaded and a just one out, the Cardinals got a sacrifice fly off the bat of Ruiz to score their sixth run of the game. The score gave LU back a two-run advantage.

It was more than enough as Dallas came back out to the mound to wrap things up in the ninth. With his appearance, Dallas tied a mark set by former Cardinal David Poss from 1984-87. With the save – Dallas’ 11th of the season – he tied his own single-season mark which he set last year.

The Cardinals return home to wrap up the season with a. three-game series against Tarleton State. The series will begin Thursday with first pitch slated for 6 p.m. from Vincent-Beck Stadium.