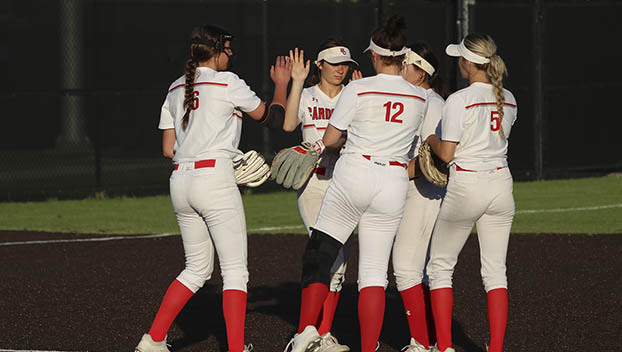 The Bridge City Lady Cardinals saw an amazing season come to an end against Liberty Saturday. The Lady Cardinals advanced to the third round of the playoffs after winning District 22-4A with a perfect 12-0 mark.

BAYTOWN – They had defending Class 4A state champion Liberty on its heels Saturday but the Bridge City Lady Cardinals couldn’t quite hold on as the Lady Panthers snagged two runs in the bottom of the seventh to capture a 2-1 victory in Game Three to win the Class 4A Region III Regional Quarterfinal series at Goose Creek Memorial High School.

The Lady Cardinals (27-7), 22-4A champions, held their own against Liberty (33-5) the entire series and were just two outs from sealing it before the Lady Panthers scratched in the last two runs.

Liberty will now advance to take on Taylor in the Regional Semifinals next week. Bridge City won Game One of the series 4-0 on Thursday while Liberty returned the favor Friday with a 4-0 victory of its own.

The Lady Panthers had runners in scoring position five out of the first six innings but the Lady Cardinals, who played excellent defense behind ace pitcher Carson Fall all day, constantly rose up in key moments until the seventh.

Maci Beam got the Liberty rally going in the bottom of the seventh with a one-out infield single. Bailee Slack then slapped a single past third and Reese Evans loaded the bases with a single to left. Beam came in to score on a wild pitch to tie the game. Hollie Thomas came up with the game-winner with a sacrifice fly that plated Slack.

Kamdyn Chandler got the win on the hill for the Lady Panthers. She scattered six hits while striking out four and walking two in going the distance.

Fall gave up nine hits to the Lady Panthers while striking out six with no walks.

The Lady Cardinals manufactured a run in the top of the third inning.

Amaris Larkin, who had two hits on the day, stroked a one-out single up the middle and swiped second. With two outs, Kaylyn Dosch reached on an infield single, pushing Larkin to third. Brooklyn Droddy then came up big, ripping a RBI single up the middle to plate Larkin.

The Lady Panthers had two runners in scoring position in the bottom of the second but came away empty-handed.

Kylie Bishop had a leadoff single up the middle and Kamdyn Chandler followed with a bunt single. Reagan Williamson moved both runners into scoring position with a sacrifice bunt. Fall got out of it by striking out Alex Wiley and then got the third out when she fielded a bunt by Bryana Pantalion for the third out.

Liberty received a one-out double from Bailee Slack in the bottom of the third but she was left stranded after Fall fanned Reese Evans and got Hollie Thomas to fly out.

The Lady Panthers left a runner on third in the bottom of the fifth.

Maci Beam had a one-out single between short and third and swiped second. She went to third on a Slack foul ball fly out to left but Fall got out of it with a strikeout of Evans.

Bridge City threatened in the top half of the fifth. Larkin reached on a one-out single and swiped second. With two outs, Larkin advanced to third but was eventually thrown out at third.

Liberty came away empty-handed again with two runners in scoring position in the bottom of the sixth.

Bishop had a one-out single between third and short and Chandler followed with a single up the middle. Fall then got Williamson to fly out for the second out. The runners advanced on a double steal but the Lady Cardinals got out of it when Wiley grounded out to first.

Hannah Murchison added an infield single for the Lady Cardinals in the top of the sixth.