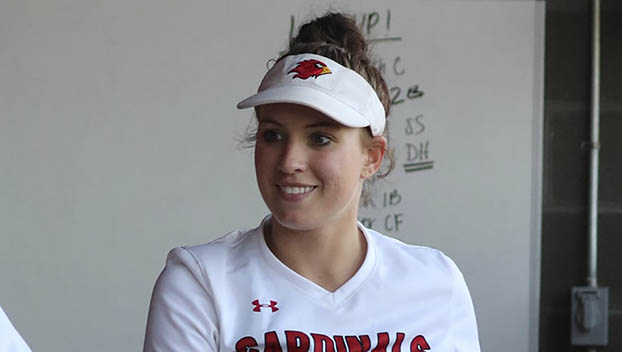 BAYTOWN – Getting a complete-game shutout from pitcher Kamdyn Chandler and some timely hitting, especially in the fifth inning, the Liberty Lady Panthers stayed alive to force a Game Three in the Class 4A Region III Quarterfinals by downing the Bridge City Lady Cardinals 4-0 in Game Two Friday night at Goose Creek Memorial High School.

The series will be decided in Game Three Saturday at noon back at Goose Creek Memorial. Bridge City won Game One by the same score Thursday night, 4-0.

Chandler scattered four hits while striking out seven and walking one as the defending 4A state champion Lady Panthers (32-5) also supplied her with some good defense.

The Lady Panthers scratched in a run in the top of the third inning.

Bryana Pantalion led off with a bloop single to right, swiped second and third and was able to score on an interference call.

Liberty found some hot bats in the top of the fifth.

Reagan Williamson roped a leadoff double to left and went to third on a sacrifice bunt by Alex Wiley. Maci Bean then hit a hard shot that went off of Fall’s foot on the mound, allowing Williamson to score. After Bailee Slack reached on an infield single, Reese Evans stroked a two-run double to left.

The Lady Cardinals had several opportunities but couldn’t quite cash in.

In the bottom of the third Marlie Strong reached on an error and Amaris Larkin had a one-out infield single to left. Makenna Carey had a nice sacrifice bunt to move both runners in scoring position. Kaylyn Dosch drew a walk to load the bases but Chandler got out of the jam when Brooklyn Droddy grounded out to her at the mound.

Fall and Hannah Murchison, who had two hits, each singled in the bottom of the fourth nut the Lady Cardinals could not capitalize.

Murchison cranked a triple in the bottom of the seventh but the Lady Panthers ended up turning a double play.