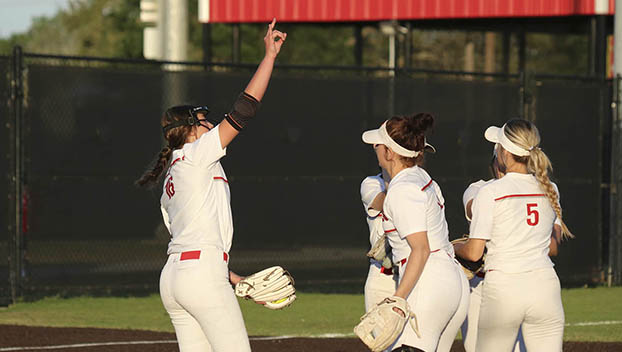 Bridge City pitcher Carson Fall and the Lady Cardinals celebrate a strikeout. Fall had 14 of them in a complete-game shutout against Liberty. (Van Wade/Orange Leader)

BAYTOWN – There was no intimidation factor at all for the Bridge City Lady Cardinals in Game One of their Class 4A Region III Quarterfinal battle against the defending Class 4A state champion Liberty Lady Panthers Thursday night.

Getting a masterful complete-game two-hitter from sophomore ace pitcher Carson Fall and a three-run offensive explosion in the top of the third inning, the Lady Cardinals notched a 4-0 shutout of the Lady Panthers at Goose Creek Memorial High School.

Fall didn’t allow a hit until the bottom of the sixth inning and finished with 14 strikeouts while walking one.

The winner of the series will face either Jasper or Taylor in the Regional Semifinals next week.

Liberty pitcher Kamdyn Chandler worked all seven innings for the Lady Panthers. She allowed seven hits while striking out eight.

The Lady Cardinals struck for three runs in the top of the third inning.

Nicole Sasser reached with one out after being hit by a Chandler pitch. Sasser swiped second and scooted to third on a wild pitch. Makenna Carey then planted a RBI single up the middle to give Bridge City a 1-0 lead.

Kaylyn Dosch followed with a single to shallow right field. Carey was able to race in to score after a bad pickoff attempt at second base by the Lady Panthers to make it 2-0. After Brooklyn Droddy got hit by a Chandler pitch, Fall drove in Dosch with an infield single.

The Lady Cardinals got an insurance run in the top of the seventh. Sasser had a infield single and Amaris Larkin drove a deep double to right field. Brooklyn Droddy was able to drive in Sasser to push the lead to 4-0.

Reese Evans got Liberty’s first hit with two outs in the bottom of the sixth on an infield single.

Hollie Thomas got the Lady Panthers other hit, a single to center with two outs in the bottom of the seventh.

Sasser, who bothered Liberty with her prowess on the basepaths all night, added an infield single in the top of the fourth as she reached base on every plate appearance.