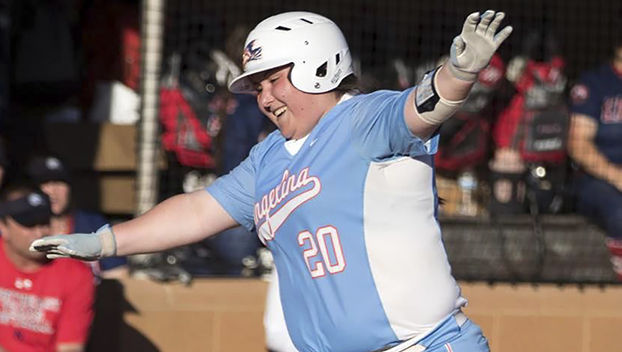 And just like that. BAM. Bailey Frenzel is earning more accolades.

How about earning the Region XIV Athletic Conference Player of the Year and First Team All-Conference Infielder.

Frenzel, affectionately nicknamed “Bam” in her playing days as a Lady Bear, has been on a tear as a freshman for the Roadrunners.

Frenzel shredded opposing pitching all season. She is currently carrying a whopping .518 batting average. She has “left the yard” 17 times with home run blasts and has 60 runs batted in. She has also scored 38 runs.

Frenzel and the Roadrunners are preparing for the upcoming Regional Tournament. Angelina currently owns a 36-14 overall record and finished 16-8 in conference play.

In 2014, the Roadrunners won the JUCO National Championship that had two former LC-M Lady Bears on the unit – Kassie James and Kayleigh Roy. In 2019, Angelia JC was the National Runnerup. Former Orangefield standout and current Lamar player Kaylee Ancelot was on that squad.

“The history around here is awesome and they always build this program to win,” Frenzel said. “I’m just proud to be a part of it.”

Of course, Frenzel has her goals set.

“I want to do my best to help us win at Angelina this year and next,” Frenzel said. “Then I want to continue my softball career and, hopefully, go play Division I somewhere. That would be so awesome. I just love this game.”

As a senior at LC-M, Frenzel captured Most Valuable Player honors on the 2021 All-Orange Leader Softball Team.

She wrapped up a great four-year run in a Lady Bears uniform by hitting .485 with 14 home runs and 60 runs batted in. She also had eight doubles and scored 32 runs. She walked 26 times, many of them intentionally, and another eye-popping stat, she only struck out once.