Lady Cardinals battle with Liberty all set after sweep of Wharton 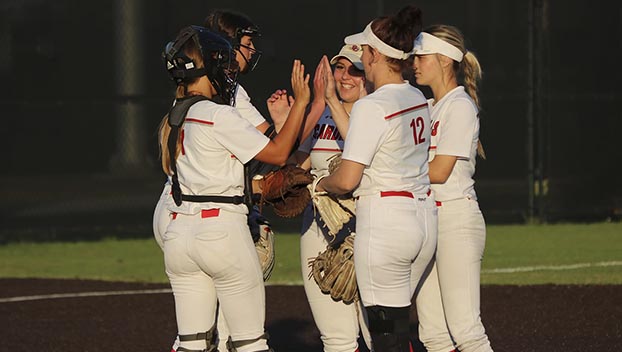 BAYTOWN – The Bridge City Lady Cardinals finished off Wharton in their Class 4A Region III Area Round playoff series, holding the Lady Tigers scoreless in both games at Goose Creek Memorial High School.

Carson Fall threw another gem Saturday for the Lady Cardinals (26-5), allowing no runs as Bridge City cruised to a 8-0 victory.

The Lady Cardinals move on to face defending Class 4A state champion Liberty Lady Panthers (30-4) in the Regional Quarterfinals at the end of the week. Liberty drilled Navasota 16-1 in bidistrict.

The series is set as the Lady Cardinals and Lady Panthers have a best-of-three-game series at Goose Creek Memorial High School Thursday, Friday and, maybe, Saturday.

In the second inning in Game Two against Liberty, the Cardinals got their offense started when Lexi Nugier grounded out, scoring one run.

Bridge City tallied three runs in the fourth inning. Kaylyn Dosch had an RBI double to lead the run scoring.

The lone bright spot for Wharton was a single by Martinez in the fourth inning. Fall went the full seven innings, allowing one hit while striking out 14 with no walks.

Fall got the complete game win in the circle as the Lady Cardinals rolled to a 10-0 victory in five innings in Game One Friday.