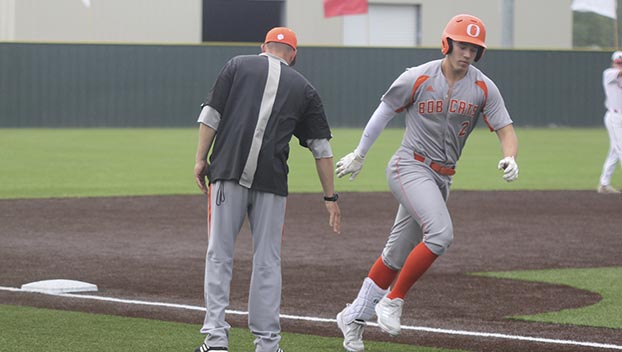 ORANGEFIELD – After completing a sweep of the Liberty Panthers in the bidistrict round, the District 22-4A champion Orangefield Bobcats turn their focus on the Navasota Rattlers in the Class 4A Region III Area Round Thursday and Friday in a best-of-three series.

The two teams will play their games at Humble High School. Game One is Thursday at 7 p.m. Game Two is Friday at 5 p.m. with Game Three, if necessary, to follow 30 minutes after Game Two.

Navasota (19-5), the third-place team out of 24-4A, took out Mickey Leland Academy 11-1 in the bidistrict round. The winner of the Orangefield-Navasota series will face either Livingston or Sealy in the Regional Quarterfinals.

The Bobcats took the lead late in the Game One 7-3 victory over the Panthers  The game was tied at three with Orangefield batting in the top of the fifth when an error scored one run for the Bobcats.
Panthers scored three runs in the fourth inning, but Orangefield still managed to pull out the victory.  Jace Smart and Jaden Shimp each drove in runs during the inning.

The Bobcats led 3-0 until the Panthers scored three runs in the bottom of the fourth.

Cooper Longron was credited with the victory for Orangefield. The lefthander lasted five innings, allowing six hits and three runs while striking out four.  Jason Bodin threw two innings in relief out of the bullpen.  Bodin recorded the last six outs to earn the save for the Bobcats.

Grady Silva was on the mound for Panthers. The righty surrendered five runs on four hits over five and a third innings.  Palmer Simeon threw one and two-thirds innings in relief out of the bullpen.

Orangefield scattered nine hits in the game.  Caleb Fregia and Kameryn Henderson each had multiple hits for Orangefield. Henderson and Fregia each had two hits to lead the Bobcats.

In Game Two both teams were strong on the pitcher’s mound Saturday, but Orangefield held on for the 2-1 win. Orangefield pitchers allowed just four hits to Panthers.

Trent Eaves was the winning pitcher for Orangefield. Eaves allowed four hits and one run over six innings, striking out ten.  Kolbie Sowell threw one inning in relief out of the bullpen.  Sowell recorded the last three outs to earn the save.Ingram was on the mound for Panthers. The righthander allowed one hit and two runs over one inning.  Jace Smart and Peyton Fregia entered the game from the bullpen, throwing four innings and one inning respectively.

State schedule for SE Texas tracksters, see how they…