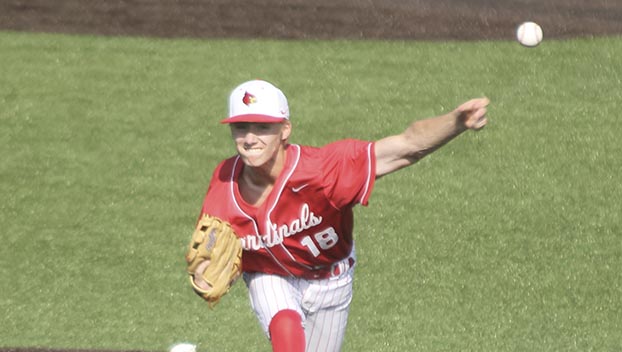 BRIDGE CITY – They were able to extend it to three games but the Bridge City Cardinals eventually fell to the Huffman Falcons in their Class 4A Region III bidistrict series at Chuck Young Field Saturday evening.

However, Huffman pitcher Ramiro Meza shut down the Cardinals in Game Three, throwing a complete-game two-hitter while striking out six and walking two and the Falcons scratched in a pair of runs to escape with a 2-0 win and the series victory.

The Falcon win offset a solid performance from Bridge City pitcher R.J. Esquivel, who went 5 2/3 innings. Esquivel allowed just two hits while striking out eight and walking four before leaving down 1-0 due to the pitch count limit.

Huffman got one of its runs in the top of the third inning.

Jacob Eccles drew a leadoff walk and went to second on a sacrifice bunt by Jake Moorhaj. With two outs, Tyson Woodland hit a swirling fly ball to leftfield that was misjudged and Ecceles was able to score.

Controversy struck in the bottom of the sixth when Cardinal JS Bearden stroked what looked to be a two-out solo home run by the leftfield foul pole to tie the game. It was initially ruled a home run by the officials but afterwards they decided to have a conference and ruled that it was a foul ball and reversed the original call as the Bridge City crowd was not too happy about it.

The Falcons added some insurance in the top of the seventh when Moorhaj and Tyler Wilkins drew back to back walks and then advanced on a wild pitch. Chance Partain drove in Moorhaj with a sacrifice fly to right.

The Cardinals got to Falcon starter Partain early on as he allowed seven hits in three innings of work.

After getting hits by John Van Huis and Justin Abate in the top of the first the Cardinals ended up loading the bases and Ethan Oceguera brought in a run with a bases-loaded walk.

Bridge City struck for three runs in the top of the second.

Draven Marlow lad a leadoff infield single and Van Huis reached after getting drilled by a pitch. Abate made the Falcons pay when he smashed a Partain offering with a three-run homer over the leftfield wall to push it to 4-0.

The Falcons pulled to withing 4-3 in the bottom of the second after a Moorhaj two-run single to center and a Wilkins RBI single to left.

Bearden put the Cardinals up 6-3 in the top of the third with a two-run double to right.

Huffman will move on to face El Campo in the Area Round next week.