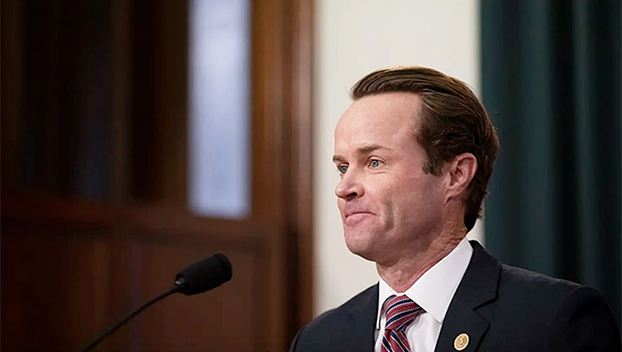 State Rep. Dade Phelan, R-Beaumont, held a press conference at the Capitol in early November 2021 to declare that he had enough votes to become speaker of the House. (Miguel Gutierrez Jr./The Texas Tribune)

With roughly 22,000 veterans living in Jefferson and Orange counties and the nearest inpatient veterans hospital in Houston, State Rep. Dade Phelan is hoping to one day see an inpatient hospital in Southeast Texas to serve their needs.

The Beaumont VA clinic, which flooded in Hurricane Harvey and Tropical Storm Imelda, offers limited services that are all outpatient.

And while some utilize the Veteran Choice Program, allowing them to use private sector healthcare, other veterans travel to Houston for inpatient services.

Phelan spoke with Orange Newsmedia about his trip last week to Washington D.C., where he discussed expanding veterans health care in Southeast Texas with a new hospital and other issues.

His hope is to see a micro-hospital in the area that would take care of the inpatient needs, sparing veterans the inconvenience of a trip to Houston.

A location for a micro-hospital hasn’t been decided, but if it comes to fruition it would need to be in an area that has not flooded. However, he is not advocating for a specific location at this time.

Phelan believes there are more veterans in Orange and Jefferson counties than 22,000, which would increase the need for the hospital. Data shows not enough veterans are signed up through VA healthcare plans, he said.

“If the VA offered more services then veterans would not have to go to Houston,” Phelan said. “If you build (a hospital in Southeast Texas) they would come.”

He did stress — in wanting the VA hospital in the area — that he is not trying to impact those who want to use VA Choice.

He spoke about veterans who must ride a bus to the VA in Houston, sit in a waiting room all day and then wait in the exam room before making the trip home for something they could have done locally if there had been inpatient services in the area.

Phelan represents District 21, which covers all of Orange County and Jasper County and half of Jefferson County next year due to redistricting.

“We will keep working,” he said. “The wheels just work a lot slower in D.C. than in Texas. It takes time to get it right.”