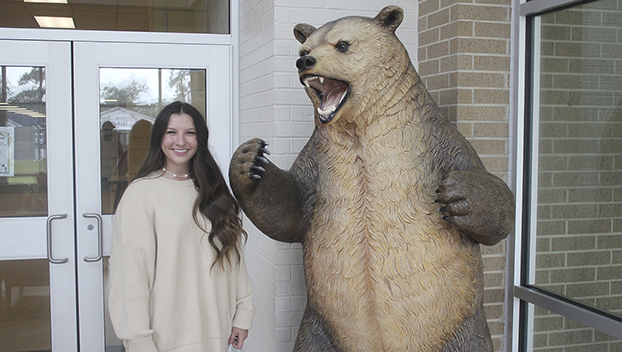 LC-M Lady Bear golf standout senior Montana Dileo has been “Bear-ing” down on the competition in her electric four-year run. (Van Wade/Orange Leader)

LITTLE CYPRESS – All it took was some popcorn and watching the Masters and the rest is history for Little Cypress-Mauriceville Lady Bears senior golf standout Montana Dileo.

It’s been a great run for Dileo while representing LC-M, as she is preparing for her third trip to the Class 4A Girls State Golf Championships. She is competing, along with teammate and fellow senior Neely Wozniak, in the tournament May 16-17 at the Legends Golf Course in Kingsland.

Going to State is “old hat” for Dileo, but she probably never dreamed of it when she was 11.

“I played softball every year when I was young and I was getting so tired of it, but my Dad said if I quit I had to play another sport,” Dileo said.

“We were sitting on the couch one day and eating popcorn and The Masters came on and I was amazed at what they were doing. I knew I wanted to try it,” Dileo said. “My parents signed me up for lessons, and I got a set of clubs the next week. I have loved it so much ever since. It’s a challenging game for sure, but it is thrilling at the same time and I’ve been able to meet so many great people.”

So just what has the daughter of Kevin and Evie Dileo accomplished with the Lady Bears?

She finished fourth at regionals as a freshman and went on to finish seventh at State. After the COVID year canceled pretty much her entire sophomore year, Dileo had a great junior year. She won District and Regionals and finished 11th at State.

As a senior, she has already won District and Regionals.

Now she is turning her focus to the State Tournament. Dileo participated on the Legends Golf Course earlier this season in a State Preview Tournament in which she finished a strong fourth.

“I like the Legends Course. It plays really well and is much better then where we have played at State before,” said Dileo. “I’m going to be practicing a lot and getting prepared. There is some tough competition for sure. There are some players from Argyle that are really, really good. I plan on going out there and doing my very best.”

Dileo is looking forward to Wozniak playing along with her this year.

“It’s great to be playing with Neely some more and I’m so proud of her,” Dileo said. “It’s going to be a great trip with Coach Harrell and our parents. We’re looking forward to it.”

Dileo has played in a slew of tournaments over the years and also practices a ton.

“I would say I average about 20 hours of practice a week, working with coaches and my Dad,” Dileo said. “I’m so lucky to have parents like I do that have driven me everywhere to play in junior tournaments, high school tournaments and to lessons. I’ve been blessed.”

Lady Bears coach Johnnie Kay Harrell has been so proud to coach Dileo and loves everything she has accomplished.

“I have been blessed to coach her for sure,” he said. “There’s not a lot I can teach her because she knows the game so well. My main thing is to keep her confidence up and make sure her head stays clear. She works so hard at the game. She’s not the type of player that thinks she’s going to just show up and win. She puts in countless hours each and every week, looking to improve.”

Harrell feels Dileo’s personality carries her a long way, too.

“Montana has the most bubbly personality and is always so upbeat, whether it is with her team or at school and is just such a pleasure to be around,” Harrell said. “She always has that smile on her face. You would never know how competitive she is until you see her in action. Just an amazing, amazing kid and player.”

Dileo recorded terrific results over the years, but a few things stand out, including April 25 of this year.

“I made my first-ever hole-in-one at Sunset Grove at the CASA Tournament, which was awesome,” Dileo said. “Last year I shot a 67 twice, once at district and the other time at the State Preview. I just kinda laughed when I did it the first time, because I remember the first-ever tournament I ever played when I shot a 66 on the first nine. It reminded me how far I had come.”

After the season is over, Dileo looks forward to graduating and continuing her golf prowess at Lamar University.

“Lamar was the right choice for me for sure,” said Dileo. “They have a really good program, plus, it is close to home.”

One thing for certain, there is nothing “corny” about Dileo’s golf game, it’s always had some major “pop.”

See just where the Lady Cardinals landed in 4A…