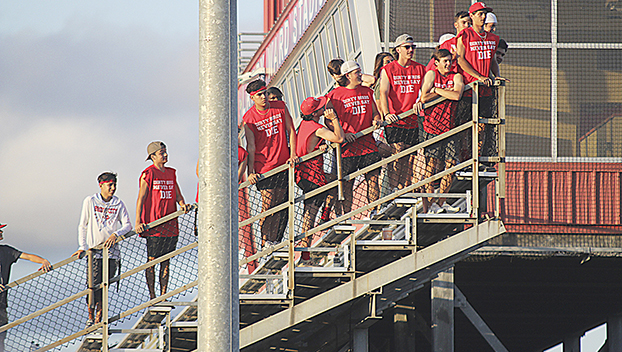 Bridge City students cheer on the Cardinals and rattle their opponents at the LC-M game. The cheering section has been quite loud at every Cardinals home game this year. (Van Wade/Orange Leader)

There will be quite the Orange County vibe in the Greater Austin area in the next couple weeks.

That’s for sure after two Orange County tracksters punched their tickets to compete in the University Interscholastic League State Track & Field Championships that will be held May 12-14 at the University of Texas.

Congrats go out to Bridge City senior Caryss Carpenter and Orangefield senior Hunter Ashworth for qualifying for the glamorous meet after great showings at Regionals over the weekend.

Carpenter soared 5 feet, 6 inches to win the girls high jump Saturday and came back and blazed the track in the 100-meter hurdles, winning the race in 15.06 seconds.

What makes it so special is I have had the opportunity to watch those two kids grow off and on the courts and fields in their respective sports.

Carpenter was part of two straight District 22-4A volleyball championship teams, while Ashworth was a key cog in helping the Bobcats football team to three playoff appearances.

It would be awesome to see them both come back from Austin with medals, but they are champions in their own right already, as Carpenter will take her track talents to Sam Houston State University in the fall and Ashworth will head to Mary Hardin Baylor to pursue more football action.

Xander Parks notched a second-place overall finish with a 150 (77-73) and fired the best round of the tournament on Day Two. He finished just two strokes behind champion Chandler Cooke of Lake Belton, who had a 148 (74-74).

The relationship between those two is so top-notch. They push each other hard but root for each other all the way, too.

The Parks will tee it up at the Kingsland Course May 16-17 as they look to be in the medal chase.

The Bridge City Lady Cardinals look to advance past Wharton in the area round of the softball playoffs.

In baseball, the 22-4A champion Orangefield Bobcats will battle Liberty to open up their playoff run.

Meanwhile, the Bridge City Cardinals will play host to the Huffman Falcons for their entire bidistrict series as the Cardinals got lucky in determining the site. I never consider the Cardinals lucky though, after all, it will be the 21st straight year the Redbirds have made the postseason.

The visiting Falcons will be entering a “loud” Chuck Young Field, too, and they better be prepared for that “rowdy” Cardinals cheering section that stands up in the corner of the football stadium and yells for the Cardinals. They are not afraid to pick on opposing teams and their fans. But it is all with fun spirit, nothing harsh.