ASK A COP — Can a funeral procession go through an intersection? 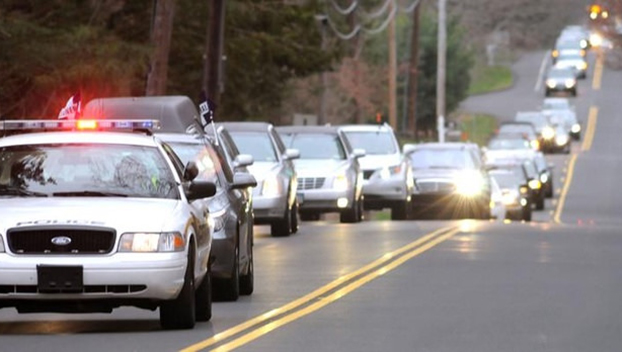 Dwight from Port Arthur asks: My friend and I were discussing a speeding ticket he received a couple of years ago, and he’s determined to believe the officer mixed him up with someone else. His belief is he was traveling in the opposite direction where the officer was sitting in his patrol car. Now, I’m not quite certain how the police radars works. He has since paid that speeding ticket and hasn’t been stopped since, and he has become untrusting of police because he believes the officer falsely charged him with speeding. Can radars catch the speed of vehicles going in the opposite direction while the police car is standing still?

Answer: Your friend is like so many who operate motor vehicles. They are aware of their speedometers but have no clue how the police radars work. The police radar can record the speed of vehicles going the same direction as well as the opposite direction at the same time. There are antennas in the rear and front of police units equipped with radars that are able to check the speeds of vehicles. I always advise citizens if you do not believe you were the proper person charged when cited, go to the court and plead NOT GUILTY! Our judicial system is not perfect, but it allows you to have your day in court and the state along with the police officer MUST prove YOU violated a law! Tell your friend the officer could have checked his speed going the opposite direction even though he was standing still facing his vehicle.

Bell from Lumberton asks: I have a friend I regularly carpool with. He’s always eating, to the point he keeps a trash bag in his vehicle because of the constant stops to fast food establishments. His driving scares the wits out of me every time he gets behind the wheel. Is it illegal to eat while driving?

Answer: First thought that came to mind is that YOU need to invest in a different carpool partner. Saving $$$ for gas is not to be compared with saving your LIFE. Unfortunately at this time in the great state of Texas, eating while driving a motor vehicle is totally legal! No law against eating while driving.