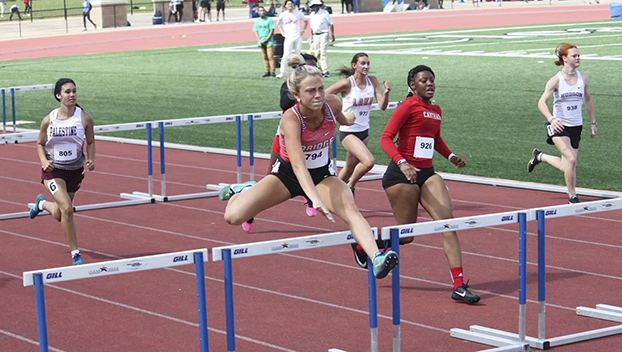 WEBSTER – Bridge City senior track standout Caryss Carpenter punched her ticket to the Class 4A State Track & Field Championships in two events, and Orangefield senior Hunter Ashworth is going to State, as well, in the boys shot put after a thrilling weekend for both athletes at the Class 4A Region III Track & Field Championships at Challenger Stadium.

Carpenter was golden in two events at Regionals, winning the girls 100-meter hurdles and the girls high jump.

She came back later in the afternoon and blistered the 100-meter hurdles, running a swift time of 15.06 seconds.

Hunter Ashworth is heading to State in the shot put, placing second with a heave of 50 feet, 5 inches.

Carpenter and Ashworth now prepare for the State Meet, which is May 12-14 at the University of Texas.

Ashworth also notched a seventh-place finish in the discus with a distance of 137-11.

There were plenty of top 10 finishes at Regionals for Orange County tracksters.

On the boys side, Little Cypress-Mauriceville’s Amier Washington barely missed out on a State berth, finishing third in the shot put with a 50-3 effort.

LC-M’s Dwight Davis was eighth in the pole vault with a 12-0 effort.

In the discus, Orangefield’s Jaliah Hawthorne was fifth (110-3) and Vidor’s Madison Powell was 10th (98-8). In the high jump, Vidor’s Raegan Stephenson nabbed fourth with a 5-4 effort.