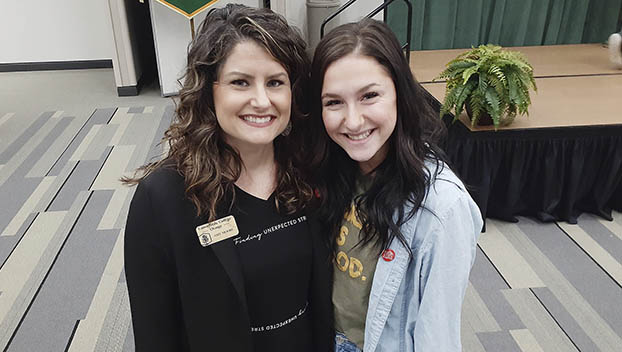 Amy Moore and Aubrey Moore take a break for a picture following the conclusion of a Denim Day presentation on the campus of Lamar State College Orange. (Stephen Hemelt/The Leader)

“Thank you for being here,” said the Lamar State College Orange director of student life. “I know a lot of this was hard to hear. It is hard to talk about, but it is important. Because you have been here, you are going to make an impact in this world. I appreciate you.”

The Denim Day gathering played to a packed room on campus where two survivors of sexual assault spoke. They were flanked by representatives of organizations operating in Orange and across the Golden Triangle that offer the counseling and reporting services needed by survivors.

Moore’s daughter, Aubrey, is a victim of assault, and “when she was able to tell her story, several of my closest friends sent me private messages and said, ‘I’ve never told anybody but that happened to me, too.’”

Many of the attendees at Denim Day were college students studying to enter fields where they are going to deal with sexual assault fallout.

“Everybody here has an opportunity to impact somebody just by listening to their stories,” Moore said. “How can we, as a community and as a college, work better together to help those around us?”

Moore thanked her daughter, who spoke this week, for being her personal hero.

Aubrey Moore, 19, is pursuing a career in forensic nursing.

She takes solace in knowing this week’s event brought together people in the community who are willing to reach out, even if it is for one person who wants to make an outcry.

“This is going to help so many people, and people don’t even realize that,” she said after the event. “I have people almost every month who text me, call me and tell me something like what I went through has happened to them. I am going to have peers come up to me later and they will say, ‘this happened to me.’

“Then, I can say, ‘did you talk to this group? Did you find out where all you can go for help?’ If not, I get to do that. I get to help people and I’m not in my profession yet. I’m still 19 years old. The fact that I am going into a career where I get to do that is something I love.” 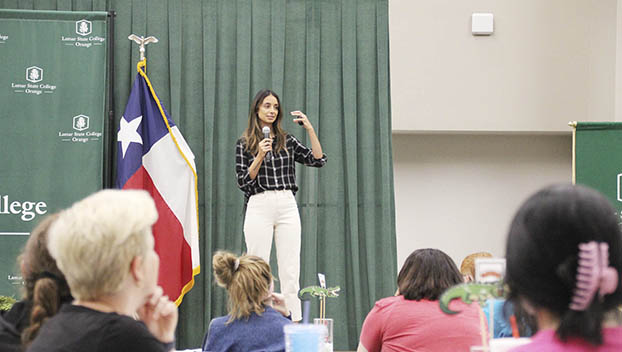 Visit brittanypiper.com to learn more information about Brittany Piper, who was the featured speaker this week at Denim Day on the Lamar State College Orange campus. (Courtesy photo)

Brittany Piper served as the featured speaker, going into unflinching detail about her own sexual assault, the two-year legal process for her case to reach a judicial sentencing and how true change won’t come until “rape culture” is addressed as a community.

She stressed how important it is to change from sympathy to empathy with rape survivors.

Understanding and better defining consent with sexual encounters is key.

She stressed permission is sober, readily given, consciously given, willingly given. It is continuous. It’s revocable, and it’s absolutely mandatory.

A breakdown that must be understood by both parties includes:

She said a culture of sexual violence and aggression, often connected to pornography must be addressed and discussed at an early age.

According to Piper, 24 percent of youth ages 5 to 12 receive unwanted pornographic exposure. 93 percent of boys 12-17 are exposed to pornography, and it’s 60 percent for girls.

She said this is one of the reasons why one in five women experience some form of sexual violence on a college campus. 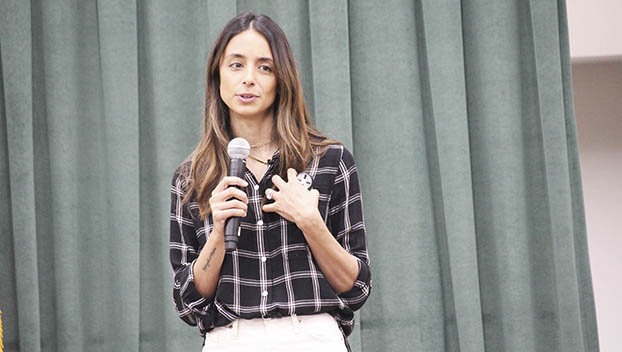 Brittany Piper talks to an Orange audience about her experience with rape and how she is helping change the way community members talk about the issues related to sexual violence. (Courtesy photo)

While in college, a man helped her change a flat tire on Piper’s vehicle.

He would not take money but asked for a ride home.

After ending up down a dimly-lit road, she was brutally raped and beaten with a tire iron.

Following the perpetrator’s arrest, Piper went through a two-year legal process that eventually saw the man sentenced to 60 years in jail.

The experience led her to substance abuse and depression, and 30 days after sentencing, she herself was arrested for battery on a officer with injury, intimidation and resisting arrest when she lashed out at an officer during a DWI stop for her boyfriend.

“The road to recovery does not have to look polished and pretty and perfect,” Piper said. “Whether or not I was stoic on that stage or in a puddle of tears on the ground, I was still just as strong in both of those cases.”

She pointed out how her sexual assault was covered my local media, pointing to one online story that ended with the line from police: “She was uncomfortable about the situation from the beginning and she didn’t really want to give him a ride. She probably should have trusted her instincts at that point.”

She finds it unacceptable today, especially knowing the people from her community took the tone of the article and ran with it by commenting negatively underneath.

“What this article should have said, instead, was: He was likely aware of his violent sexual desires and he should have trusted his better judgment to not rape her.”

“The difference is the ownership, accountability and focus is on him and his actions and not me,” Piper said. “This is how we have gotten to a place where victim blaming is supreme.”