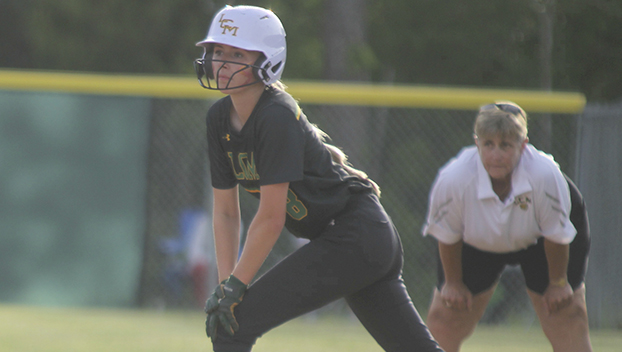 LC-M's Rhylan Wilson looks to take off from first base for the Lady Bears in Game One against Huffman. (Van Wade/Orange Leader)

HUFFMAN – It was a tough outing in Game Two for the Little Cypress-Mauriceville Lady Bears in their Class 4A Region III bidistrict series against the Huffman Lady Falcons Friday evening.

The Lady Falcons got hot with the bat and took advantage of major LC-M miscues as they went on to down the Lady Bears 15-1 in four innings to sweep the series at Huffman High School.

LC-M freshman Keylie Washburn hit a solo home run shot in the top of the first to give the Lady Bears a quick 1-0 edge.

However, the Lady Falcons struck for eight runs in the bottom of the first while the Lady Bears committed four errors in the inning.

Lady Cardinals get the brooms out on H-J