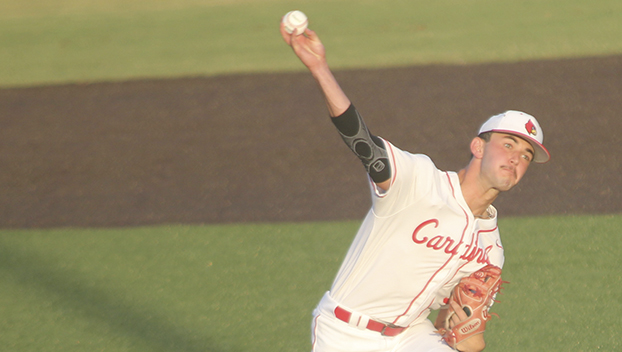 BRIDGE CITY – Getting a complete game from ace pitcher Ethan Oceguera, the Bridge City Cardinals scooted past the Little Cypress-Mauriceville Bears 9-2 in District 22-4A action at Chuck Young Field Friday night to nab the second-place playoff berth out of 22-4A.

The Cardinals scored three runs in the bottom of the first as John Van Huis scored on a passed ball, J.S. Bearden drew a bases-loaded walk to score the second run and Braylen Collins eventually came in on a passed ball.

Justin Abate made it 5-0 in the bottom of the second when he cranked a two-run home run over the leftfield wall that also brought in Van Huis, who reached after being hit by a pitch.

Van Huis upped the lead to 7-0 in the bottom of the third with a two-run single that scored Bearden, who singled to right, and Brice Swanton, who had reached after being hit by a pitch.

Oceguera got in on the act in the fourth when he stroked a solo homer run over the leftfield wall.

The Bears scratched in a pair of runs on two hits in the top of the sixth inning.

Gunner Johnson reached on an error and Seago got on after a bunt single. Ashton Landry loaded the bases with a single to left. Johnson came in to score on a balk and Reid Peco brought home Seago with a fielder’s choice RBI.

Collins had a two-out single for the Cardinals in the bottom of the sixth and R.J. Esquievel singled to right. Collins eventually scored on a Bear throwing error.