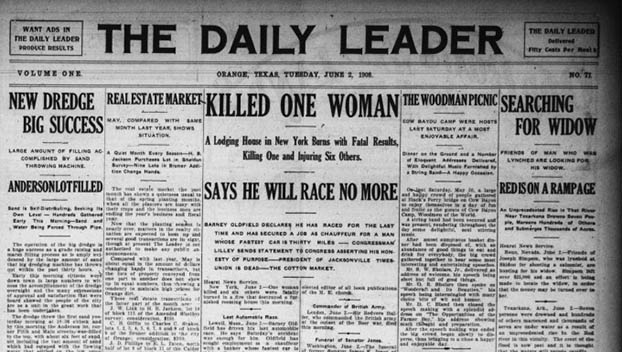 Newspapers have changed their styles of reporting news in the last century.

In the days before television and social media, the newspaper was the sole source people turned to for information about their town and its citizens.

The most popular column in the Daily Leader in the early 20th Century was called “Personal Mention.” It was a list of people who had come to Orange, left Orange, were having a personal event, or even an illness.

W.E. Mount of Gibson, Louisiana came in this morning and is spending the day with relatives.

W.L. Anderson of the W. L. Anderson Hardware Company is confined to his home by illness.

A.K. Hurst of Philadelphia was among the morning business visitors in Orange.

D.D. Young of Taylor, Texas arrived in the city last night on a business mission.

J.M. Dawson representing a well known insurance company with Dallas headquarters is in the city on a business trip.

Miss Vivian Graham, a charming young lady of Mineola is in Orange on a month’s visit with her sister, Mrs. E.L. Bruce, corner of Seventh and Orange Avenue.

Messers. J.H. Labit and A.F. Lyons, the latter of Vinton, Louisiana but who spent yesterday in Orange, left this morning by boat for the Labit-Lyons rice farm at Black’s Bayou.

Roy Terrell of the Frisco came in this morning from Beaumont to confer with officials of the O&NW Railroad.

C.C. Cary, General Manager of the Frisco with Beaumont headquarters, was in the city this morning conferring with officials of the Orange and Northwestern.

H.S. Filson, General Manager of the Alexander Gilmer Lumber Company of Remlig is transacting business in Orange, arriving in the city last night.

Dr. J.D. Butler of the Gilmer Lumber Company and a former resident of Orange is shaking hands with his many friends here.

Will E. Ogden a prominent Beaumont citizen was among morning arrivals in Orange, coming over on a brief business trip.

Sam Bendell, a prominent merchant of Lake Charles, was a last night business visitor in the Gate City.

Sam M. Fulkerson, Assistant Secretary of the Progressive League left this morning for a day’s business trip to Houston.

Koger Stone of Bellville, Texas is a visitor in the city, a guest of R.H. Smith and his uncle and aunt Mr. and Mrs. C.E. Kepler.

Mrs. J. T. Moss left this morning for Houston where she will spend several days.

H.J. Ortmeyer of the Ortmeyer Furniture Company is spending several days in Houston where he is attending the meeting of the Embalmers and Funeral Directors Association. (At this time Ortmeyer also owned Ortmeyer Funeral Home)

Mrs. Etta Greenwald who has been spending some time in Orange with her mother, Mrs. Sokolski, has gone to New Orleans where she will make her future home.

From this column it appears there was enough diversified business being conducted in Orange by “out of towners” and out of Orange by Orangites to show what a prosperous city Orange was at that time.