Lady Cardinals get the brooms out on H-J 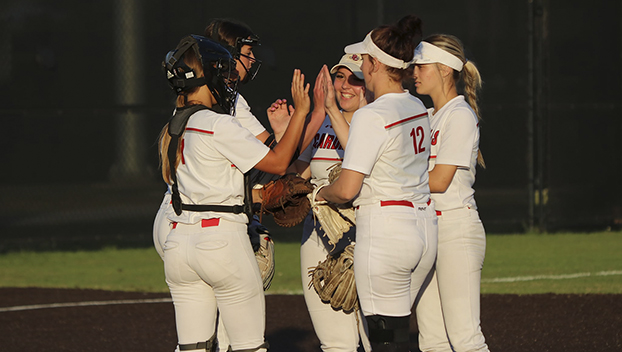 The Bridge City Lady Cardinals swept past the Hardin-Jefferson Lady Hawks in the bidistrict round of the playoffs Thursday. (Photo courtesy Andrea Tupper)

ANAHUAC – Making quick work of Hardin-Jefferson, the District 22-4A champion Bridge City Lady Cardinals are zipping to the Class 4A Region III area round after disposing of the Lady Hawks in the bidistrict round Thursday evening at Anahuac High School.

The Hawks put up some fight but the Lady Cardinals managed a 5-3 victory in Game One and finished it off with a 5-2 win in Game Two.

In Game One, the Lady Cardinals built a five-run lead in the seventh inning and then held off Hardin Jefferson’s charge.

Hardin Jefferson scored three runs in the failed comeback on a double by Dawson and a wild pitch during Beavers’s at bat.

Carson Fall pitched Cardinals to victory. The righthander allowed three hits and three runs over seven innings, striking out 15 and walking one.

Bridge City tallied one home run on the day. Marlie Strong put one out in the sixth inning. The Lady Cardinals totaled nine hits in the game. Strong, Hannah Murchison, and Brooklyn Droddy each collected multiple hits for Bridge City. Strong led the way with three hits in three at bats. Bridge City was sure-handed in the field and didn’t commit a single error.

In Game Two in the second inning, the Lady Cardinals got their offense started. Nicole Sasser drove in one when with a RBI single.

Fall was the winning pitcher for Cardinals. The righty allowed four hits and two runs over seven innings, striking out 11 and walking one.

Sasser led Cardinals with two hits in three at bats. Amaris Larkin had two RBI and Makenna Carey drove in another.

The Lady Cardinals will now move on to the area round next week and will face either Wharton or North Forest.