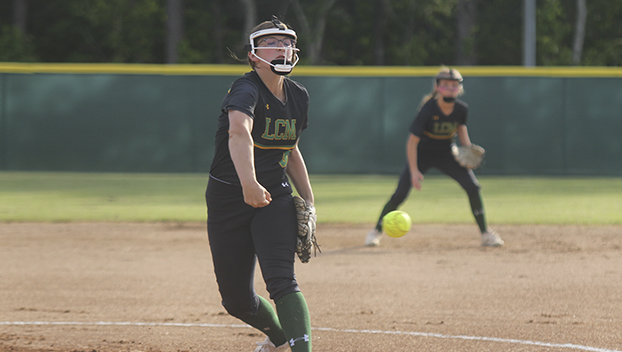 LC-M’s Cami Shugart delivers a pitch against Huffman in Game One of the 4A bidistrict playoffs at Lady Bear Field. Shugart allowed just four hits in the tough 3-0 loss. (Van Wade/Orange Leader)

Padgett allowed the Lady Bears just two hits while striking out eight and walking one. The Lady Bears made solid contact at times, but hit them a lot right at Lady Falcon fielders.

Cami Shugart pitched well for the Lady Bears too. She went the distance, allowing just four hits while striking out three and walking one.

The game was scoreless through the first four innings. Lady Falcon Kaci Gobert, who was 2-for-3, changed that when she belted a solo home run that just barely cleared the centerfield fence to lead off the top of the fifth inning.

The Lady Falcons scratched in a pair of insurance runs in the top of the seventh.

Taylor Byron reached on a one-out infield single. Gobert then followed with a deep double to centerfield as Byron was able to score after the big hit on a Lady Bear error. Breelee Nichols made it 3-0 when she brought home Gobert with a RBI single to right.

The Lady Bears got a runner on third in the bottom of the second. Rhylan Wilson reached on a one-out error. Jacelyn Cook then fouled out to right but Wilson tagged up and zipped all the way to third.

Padgett got out of it by striking out Ella Stephenson.

Lexi Moss roped a leadoff single for LC-M in the bottom of the fourth but was left stranded whn Huffman finished the inning with a double play..

Shugart got the Lady Bears’ second hit of the night with a one-out infield single in the bottom of the sixth and then swiped second. Moss hit into a fielder’s choice as Shugart was thrown out at third and Padgett struck out Keylie Washburn to end the threat.

Game Two of the series will be at 5 p.m. Friday at Huffman High School. Game Three, if necessary, will be 30 minutes after Game Two.

The winner of the series will face either Sealy or Houston Furr in the area round next week.