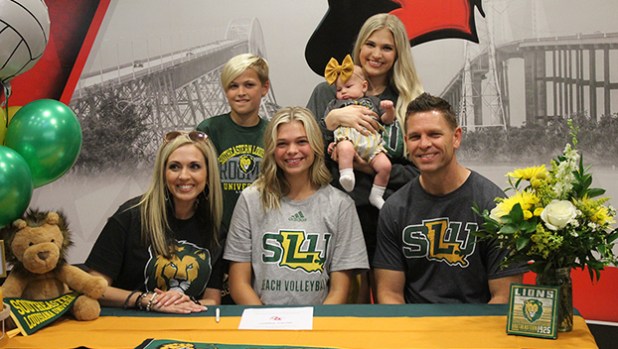 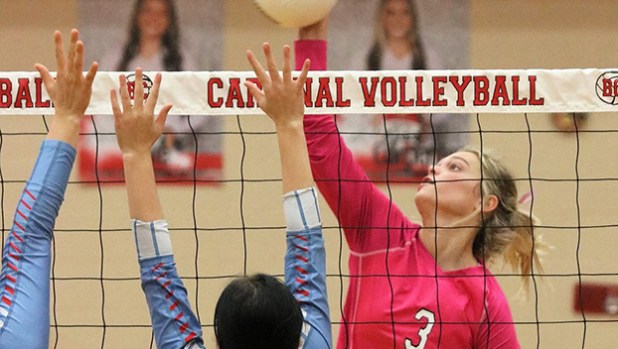 BRIDGE CITY – Bridge City volleyball standout Harlee Tupper was a dominant player on volleyball courts across Southeast Texas the last three years, now she is planning on doing something no Orange County player has ever done.

She’s going to play NCAA Collegiate Beach Volleyball for the Southeast Louisiana University Lady Lions in the Southland Conference. She signed with SELU in front of family and friends Tuesday at Bridge City High School.

“Beach volleyball is something I tried back in 9th grade and I got back into it last year and just love it,” Tupper said. “I may not be totally done with indoor, because the SELU coach is the indoor coach, but I really want to make a mark in beach volleyball. I can’t hardly wait to see what I can do.”

So what does Tupper love about playing on the beach compared to the indoor game?

“I love being outdoors, playing the game when it is windy and sunny, getting sand in your eyes and just flying around,” Tupper said. “The environment is not controlled. There is no air conditioning on the beach, and you get to see a lot of different kinds of elements.”

Tupper feels she can adjust nicely from going to five teammates on the court to just one on the beach.

“The beach is different because you have to be in great sync with your teammate,” Tupper said. “You really have to know what the next move is and what each one is thinking. It’s a ‘your ball, my ball’ type of thing. You also have to fly around with a lot more energy, but it is a lot easier diving in the sand compared to a hard indoor court.”

The Lady Cardinals went 39-6 last season and a perfect 12-0 in 22-4A play and advanced to the Class 4A Region III quarterfinals under the direction of first-year head coach Savanah DeLuna.

Tupper made the All-Orange Leader Team three straight years and was the Most Valuable Player the last two seasons.

This past season she was named as one of the top 10 servers in the state by Lonestar Preps.

“It was such a pleasure to coach Harlee in my first year here,” said DeLuna. “She has been such a huge part of the success of Bridge City volleyball. She made it easy for me coming in. She’s a really good leader. She is one of the best athletes I’ve ever had the pleasure to coach. She’s so respectful, hard-working and dedicated to the sport she loves. Just an awesome, awesome, kid.”

Tupper certainly enjoyed her run in a Lady Cardinals uniform.

“I’m definitely going to miss it and all of my teammates and friends,” Tupper said. “We won two district championships and we had so much fun together on and off the court as a team. I was so happy to play for Coach DeLuna. She really gave us that drive and really pushed us. She never wanted us to get arrogant and always wanted us to stay in the moment.”