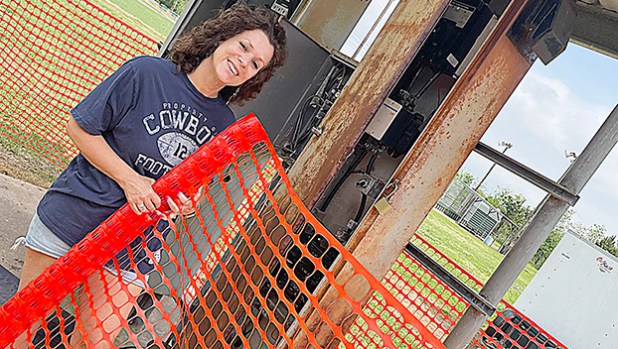 Terri Childs holds plastic fencing, which was placed around the area for safety. (Courtesy photo) 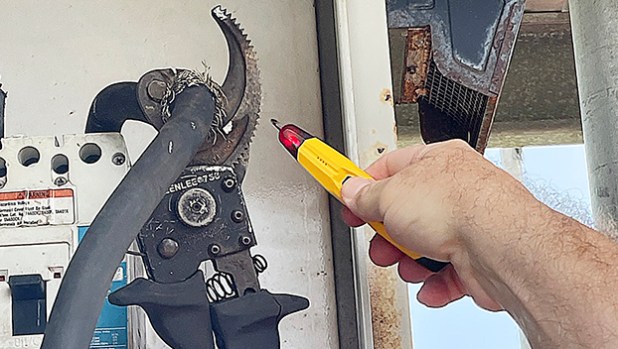 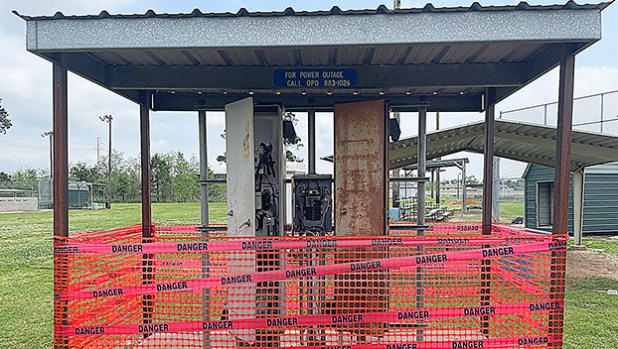 Orange plastic fencing and tape was used to cordon off the area for safety. (Courtesy photo) 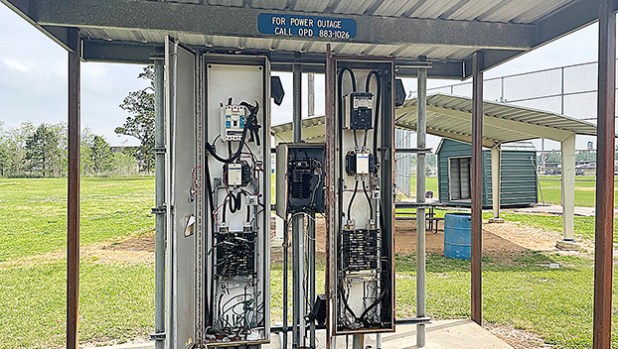 When local leaders learned thieves targeted the Orange Youth Baseball and Softball League fields, they banded together for a solution.

The thieves stripped copper from electrical boxes and stole lawn equipment sometime on the night of April 14 at the fields on Eddleman Drive in Orange.

Brad Childs of Childs Building Supply, who also serves on the city council, offered to donate time and electrical work to make the repairs.

However, the city, which owns Memorial Field, carried insurance to cover the cost. Repairs began Monday under contractor Istre Electric.

But Childs didn’t want to shy away from helping, so in lieu of doing the electrical work, he donated $1,000 in an account created to replace the lawn equipment that was stolen, he said.

On Easter afternoon, he and his wife Terri visited the fields and saw the two large, 7-feet tall electrical boxes open and a hand tool left stuck on one of the cables inside. Childs believes the thief likely got shocked and left the tool.

Childs used a voltage detector and noted both panels were “hot” top to bottom. Each panel had 400 amp services, he said.

“It’s a blessing a curious child didn’t stick their hand in it,” Childs said.

Entergy Texas has since cut the power to the boxes.

The city did an assessment Monday morning.

Childs and his wife brought orange plastic fencing and wrapped the area to keep people away for safety.

And community members took to social media to spread awareness.

“Once the post came out (about the crime), calls started to come in and people started asking if they could help,” he said, adding electricians offered their services and police officers offered to start a fund before officials learned of the insurance policy.

“For the little bit of copper they actually got and what it did to the kids, disrupt their schedule, it made me feel sick and angry,” Lawrence said of his feelings when he learned of the crime.

Orange City Manager Mike Kunst explained the city has an agreement with Orange Youth Baseball and Softball for the use of the fields.

OYBS is responsible for maintenance, and the city maintains the common areas such as mowing in between the fields. Kunst said the damages have been submitted to the city’s insurance adjuster.

One of the fields is expected to be repaired by the end of the week.

“Unfortunately, the second field’s (pony field) repairs are awaiting parts and it may be two to three weeks,” Kunst said.