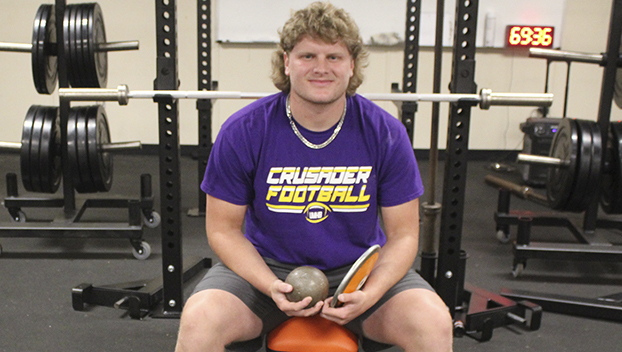 ORANGEFIELD – What a journey it has been for Orangefield senior Hunter Ashworth.

Now, he hopes a couple more nice trips are ahead of him.

Ashworth, a dominating figure in football at fullback and defensive end the past three seasons, is looking to make his mark in the shot put and discus at the Class 4A Region III Track & Field Championships Friday and Saturday at Webster’s Challenger Stadium.

“I’m really looking forward to competing and to see where I’m at,” Ashworth said. “It’s just great that I get to continue representing Orangefield. There is nothing quite like being a Bobcat.”

Plenty of fans have enjoyed Ashworth’s efforts but perhaps one of his biggest supporters is Orangefield Athletic Director and head football coach Josh Smalley.

“Hunter epitomizes everything you could want in a student-athlete,” Smalley said. “In this day and age where there tends to be a lot of individuals, Hunter is the complete opposite of that. He is all about being a team player and has always been a ‘We guy.’ He’s constantly rooting all of his teammates on and pushes them in everything that they do too. What a pleasure it has been coaching him. He’s one you don’t forget, just a special kid.”

Ashworth advanced to Regionals after winning the shot put at the Area Meet, heaving it 50 feet, 9 inches. He will also compete in the discus after finishing second with a 142-4 effort.

“I was consistent in the shot put, and that was by far my best throw of the season,” Ashworth said. “I got a pretty good throw in the discus, too, and I feel great that I get to participate in both. My best shot to get to State would be in the shot put, though. I rank second in the Region going into that.”

Ashworth, who also competed in the Class 4A State Powerlifting Meet for the second straight year this spring, has been steady improving as the track season progresses.

“Early on, I was splitting my time with powerlifting and track, and making it to State again in powerlifting was awesome, to be able to do it again my senior year,” said Ashworth. “After that I was able to concentrate on my throwing. I have been able to work on the little things more the last few weeks and was able to improve by a few feet in both events. I’m really wanting to get in that 52-feet range in the shot. If I can do that, I would have a good chance to move on to State.”

The three-time All-Orange Leader and All-District pick was such a key cog in leading the Bobcats to three straight football playoff appearances.

Whether it was rolling through opposing defenses with his bruising running style or controlling the line of scrimmage from his defensive end spot, Ashworth was quite a force.

As a senior, Ashworth rumbled his way to 750 yards and 11 touchdowns on 146 carries while making a slew of crucial stops at defensive end.

Ashworth had more than 600 yards on the ground as a junior. With halfback Cameron Dischler going over 1,400 yards this season, Ashworth was one of his biggest supporters.

“Hunter could have easily gotten 100 more carries and 500 or 600 more yards, but he’s a team player,” Smalley said. “We ran a little more on the outside this past season but we knew we could count on him when we needed those tough yards. He’s the type of kid that is just as happy seeing his teammates get in the end zone as him. Just a great all-around kid. You can’t forget he was All-District at defensive end for three years. The kid rarely came off the field.”

Ashworth said he just did what was needed to help the team get better.

“If I was needed on defense, I was there, and if I needed to be a lead blocker for Cameron (Dischler), I was there,” he said. “I knew, with Cameron’s talents, that we could get some big gains on the outside. If we got him loose, he could take it to the house. That was awesome to watch because he got loose a bunch. I knew if we needed the tough inside yards to balance it out, my teammates could turn to me and I would get those for them.”

Ashworth has many amazing memories with the Bobcats, but his biggest came during this past football season.

“This place was so crazy after we beat Silsbee here at home to start district last season,” he said. “We had a bye week the week after, so it was nuts around here for two weeks. Those moments are the ones you remember. The most fun I ever have each year was celebrating wins with all of my teammates in the locker room after games.”

Ashworth will continue to play football at Mary Hardin Baylor next fall. The Crusaders won the NCAA Division III National Championship last season and also in 2019. He will be joined by All-District linebacker and teammate Brayden Babineaux.

“I’m looking forward to that challenge, and they have such a great tradition and great facilities, too,” Ashworth said. “They like me at defensive end, and who knows, maybe I can get in at fullback. We’ll see. I can’t wait for the opportunity, that’s for sure.”

Ashworth plans on majoring in criminal justice as he continues to pursue winning on the field.

Smalley has faith in whatever Ashworth wants to accomplish.

“He makes excellent grades and is just so well-rounded as a person,” Smalley said. “Mary Hardin Baylor is getting a tremendous kid, and we’re going to miss him around here, no doubt.”