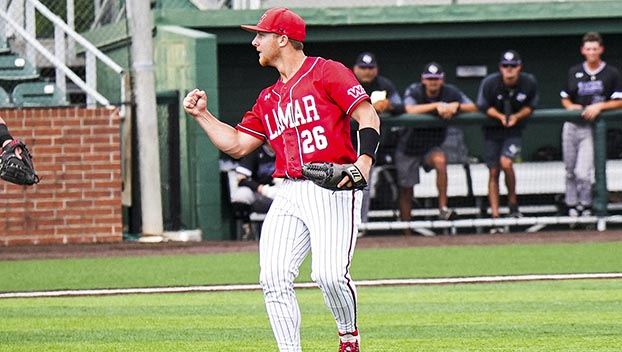 BEAUMONT, Texas – Lamar University rallied with a couple of two-out runs in the bottom half of the eighth inning to reclaim a one-run lead and closed out it out in the ninth to defeat Stephen F. Austin, 4-3, Sunday afternoon in the series finale. The victory moved Big Red to 24-16 on the season and 11-7 in Western Athletic Conference games, and it marks the second time this season LU has taken a series from the Lumberjacks (LU won five of the six regular-season meetings).

LU never allowed the Lumberjacks to hold the momentum for long answering every SFA score in the bottom half of the inning.

Junior Daniel Cole got the start Sunday and was stellar going 4.0 innings allowing just one unearned run on four hits with a walk and a strikeout. His lone surrendered run came in the third inning. He was one of five Cardinal pitchers to take the mound Sunday. Former West Orange-Stark standout Jack Dallas (3-0) pitched the final two innings, allowing one run on two hits with two strikeouts to pick up the win.

The top of the Cardinals lineup did the majority of the damage Sunday with spots 1 – 4 going 6-for-13 with four runs scored and four RBIs. Both Kirkland Banks and Matthew McDonald led the way with 2-for-4 efforts, while Kemp was 1-for-3 with his lone hit a two-run blast to right.

The Lumberjacks broke the scoreless tie in the third when they took advantage of a hit and an error to push a run across. In an odd scene on the field, there was an approximate 20-minute delay after Cameron Crawford was hit by a pitch. After Crawford reached the bag, it was determined that his bat was an illegal bat, and it was tossed out of the game, but Crawford remained safely on first. Cole didn’t allow the delay to affect him as he got out of the inning.

Big Red wasted little time answering back in their half of the inning. After Banks singled to get on, he eventually moved over to second on a muffed pick off. Whether Banks got to second or remained at first didn’t matter as Kemp blasted an 0-2 pitch over the right field wall for his fifth homer of the season – which game the Cardinals a 2-1 advantage.

It appeared the one-run lead is all the Cardinals would need as the bullpen shutdown SFA’s offense for the next four innings but ran into some trouble in the eighth. The Lumberjacks had runners at second and third with no outs. The visitors from Nacogdoches managed to tie the game on a sacrifice fly off the bat of Clayton Loranger. Moments later Dillon Eatman singled scoring the ‘Jacks’ second run of the inning and to retake a one-run lead.

SFA had retired 13 straight heading into the eighth but all that would change with two out in the inning. Banks singled through the left side to start the inning and he moved over to second on a five-pitch walk to Kemp. Junior Kelby Weyler drove in the tying run on an 0-1 pitch he hit to left field scoring Banks. Moments later, McDonald singled to right scoring the go-ahead run.

SFA tried to make it interesting in the ninth, getting a runner to 2nd, but Dallas and the LU defense didn’t allow him to get any further as the game ended on a grounder to Kemp at first.