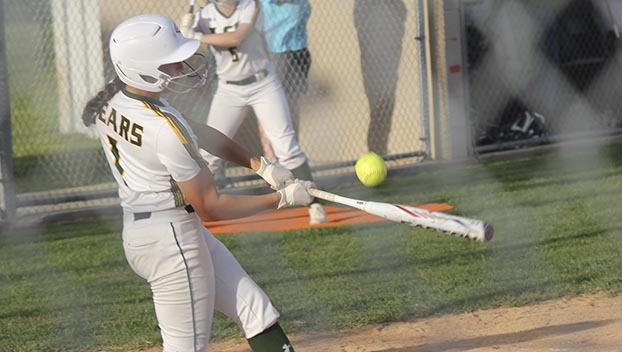 ORANGEFIELD – Getting a pair of two-run homers from Shae Fontenot and Lexis Moss, the Little Cypress-Mauriceville Lady Bears wrapped up the District 22-4A regular season with a 6-0 victory over the Orangefield Lady Bobcats at Lady Bobcat Field Friday night.

The Lady Bears finished the regular season with a 10-2 record, good enough for the second-place playoff seed. They will play either Liberty, Huffman or Hamshire-Fannett in the Class 4A Region III bidistrict playoffs at the end of next week. Those three teams all tied for first-place in the District 21-4A race and will have to settle it on the field. The Lady Bears will tqke on the team that gets the No. 3 seed.

Against the Lady Bobcats, Cami Shugart worked all seven innings for the Lady Bears, scattering three hits while striking out 11 and walking one.

Fontenot got the Lady Bears on the scoreboard with her two-run shot over the leftfield wall. Moss made it 4-0 with a two-run blast nearly in the same spot.

Jacelyn Cook went 2-for-4 for LC-M and scored a run while Shugart had a double and drove in a run.

The Lady Cardinals (20-5, 12-0) will take on either Hardin-Jefferson or Livingston in the Class 4A Region III playoffs next week. Hardin-Jefferson and Livingston tied for fourth-place in District 21-4A and will have to play a play-in game to decide the No. 4 seed out of that district.

Against Lumberton, Carson Fall notched the win for the Lady Cardinals, allowing two runs on four hits while striking out 20.