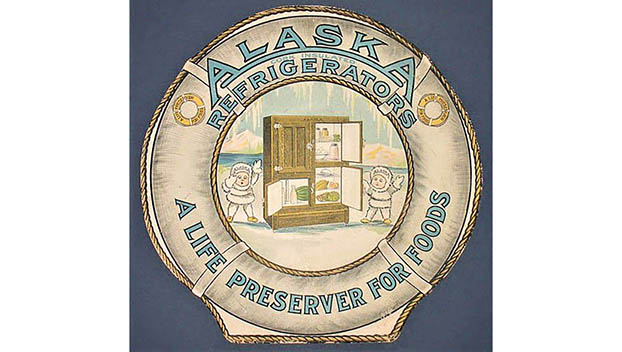 Alaska Refrigerators were marketed as “A Life Preserver For Foods.” (Courtesy photo)

The Sunday/June 22, 1930, edition of the Orange Leader had a large advertisement about an ultra-modern refrigerator being on sale.

The storage capacity of the refrigerator on sale was 50 pounds and included a would-be 300 pounds of free ice.

The Alaska was a cutting edge refrigerator. Its predecessors had been basically hardwood boxes to contain ice with a separation to keep the ice from touching the food and a drip pan to catch the melted ice.

The Alaska refrigerator was famous for its food saving and ice saving “perfected insulation.” This was a layer of cork between the outer and inner walls.

The refrigerator had a splendid design and finish. It was available in enamel or porcelain in a snow white finish that was sanitary and easily cleaned. It was guaranteed to give years of ice-saving service.

The outstanding feature of the Alaska was “Food Ex.” This was an index that showed where each of the five shelves kept which food the best. Food Ex was based on the recommendation of “famous domestic science teachers” and of the United States Bureau of Home Economics and was an exclusive feature of Alaska refrigerators.

The ad stated: “Here in all sizes-styles-prices. See this line of refrigerators now — we supply 300 pounds of ice and guarantee satisfaction.

Users were advised to ask their iceman to check the efficiency of their refrigerators to see if they were keeping food chilled below the danger point of 50 degrees. If they were not keeping food below 50 degrees, then it was time for the old refrigerator to be replaced, preferably with the newest-model Alaska.

The offer was good at both stores before the merger.

The Alaska refrigerator was tested and approved and had the Seal of the Good Housekeeping Institute.