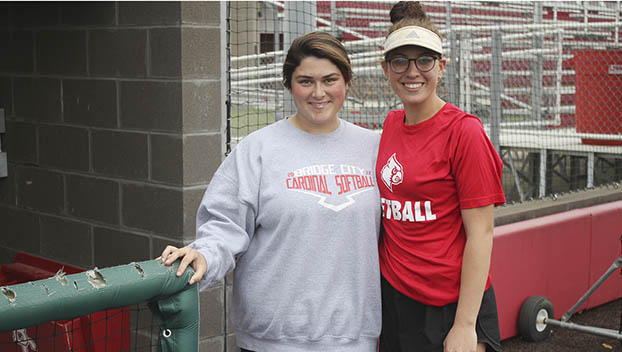 Bridge City senior softball standout Hannah Murchison (right) is so thrilled to be back on the diamond for Coach Raven Harris after bouncing back from major knee surgery. (Van Wade/Orange Leader)

BRIDGE CITY – To become a champion, you have to have players who have that “heart of a champion.”

The District 22-4A softball champion Bridge City Lady Cardinals have just that in senior Hannah Murchison.

Murchison could have sat back and waited to play for the Lamar State College Port Arthur Seahawks next season after signing with them in the fall following a gut-wrenching knee injury suffered during basketball season.

But that was not going to happen for the motivated Murchison, who wanted so bad to get back on the softball diamond with her Lady Cardinals teammates and Coach Raven Harris this season.

Murchison tore the meniscus in her left knee a few games into the basketball season but battled all the way back for one more go with the Lady Cardinals.

“After spending basically four weeks in a wheelchair after the surgery I constantly told myself I was going to get on that softball field and be with my teammates again,” Murchison said. “It was a tough journey, but I knew I could do it. Thanks to my family, teammates, coaches and friends, I had a lot of help along the way.”

Murchison started to feel pain in her knee in October, and a few games into the basketball season she knew she couldn’t take it anymore.

“I went to the doctor in October and I was told to stay off of it for a couple weeks,” Murchison said. “I did that, but it just didn’t go away. A lot of fluid had built up, which wasn’t good, so surgery was needed. We did it quick, and I wanted it resolved so I could get back on the field when softball came around.”

The news from the doctors was not great at first.

“They told me early that I would have a 50/50 chance to get back on the field,” Murchison said. “But my physical therapy was going really well. I pushed myself without overdoing it and I was showing improvement with my flexibility. After that they said I could come back hopefully by April 13, but I was able to return March 20. I was so glad to be back on the field with my friends instead of just hanging around them in the dugout.”

Harris was elated about the progress Murchison made and is proud to have her back in the lineup. After all, Murchison was All-District last season.

“It’s so special to have Hannah back, after all, she is such a wonderful person and a great senior leader for us,” said Harris. “A lot of people thought with the severity of the injury, Hannah would not make it back to where she is. I knew better with those assumptions. I know what type of competitiveness Hannah brings. Having her back makes everyone feel whole again, and she has stepped in and played well since she’s been back.”

Murchison came back for her first game against Silsbee late in the first half of district play and has played in six more since then.

“It was so good to see her get those first at-bats against Silsbee,” Harris said. “You could just see her gradually improve each time out as she got adjusted back to the game. It’s just great to have her out on the field again with that big smile of hers. She’s such a leader, too. She was our biggest cheerleader while she was recovering. (Lamar State College Port Arthur) is getting a good softball player when she gets there next year.”

Murchison got a little worried about the deal after she was forced to have surgery.

“Brittany Baker (college assistant coach) told me to not worry about it, they will be waiting on me,” said Murchison. “That was so good to hear and made me relaxed while I was doing all of my physical therapy.”

Murchison has been in the outfield since she came back, along with some duty at first base as she is fully acclimated back into the lineup.

“I appreciate Coach Harris so much because she really counseled me through so much,” Murchison said. “She wanted me to weigh my options, understand them and focus on what I needed to do most, which was to get healthy.”

Now Murchison, the daughter of Lyndsay and Jay Murchison, is honed in on getting the Lady Cardinals deep into the postseason.

“We knew going into this season we had a lot of talent and we proved it by winning the district this year and kept a proud tradition going of great softball here at Bridge City,” Murchison said. “We were young last year and we’re still pretty young this year, but we always knew the potential was there. I’m just so thrilled I was able to come back and be a part of this team. I can’t wait to see how far we can take it this year, and I’ll be rooting them all on next year, too. We are all pumped up, for sure.”