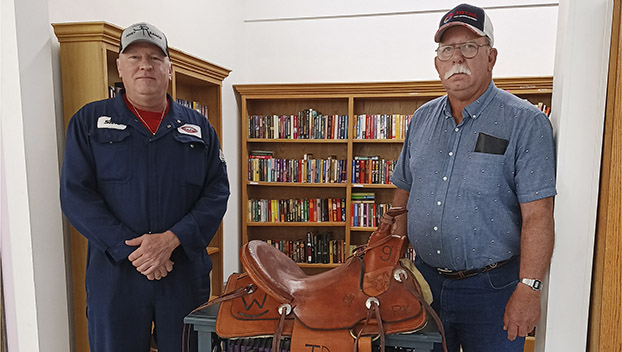 Stephen Clark, left, and Gene Clark pose with the saddle made by their ancestor, James William Clark Jr., at Belle Reeve Book Company in Nederland. (Sierra Kondos/Special to The Leader)

Family traditions hold values and beliefs that are passed down from one generation to the next. Traditions help children feel a sense of belonging and consistency in their family.

For the Clark family, this is represented with an American Western saddle created by James William Clark Jr., their great-grandfather three times over. The saddle has been passed down from father to son for five generations. Gene Clark of Newton, Texas, is now in possession of the heirloom.

When a chance encounter with another Clark relation transpires, the mysterious location of the Saddle maker’s grave became a source of intrigue. This motivated the Clark men to work together and discover their ancestor’s resting place in Orange County.

The problem? The grave rests on private property, and the last Clark to see the grave is deceased. 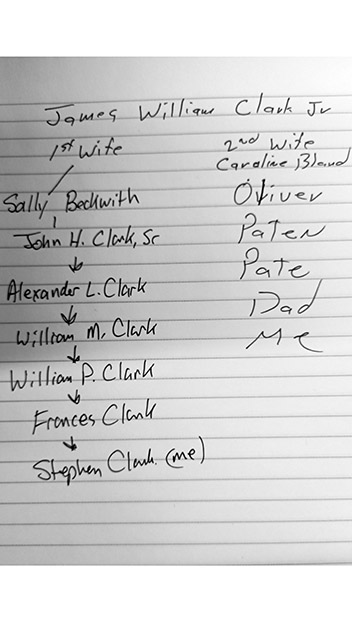 “According to the census, James William Clark Jr. was a saddle maker, farmer and rancher,” said Gene Clark, Newton County resident. “He arrived in Texas in 1835 with his wife, Caroline Bland Clark, from Vermillion Parish, Louisiana. They came along with all her family: her brothers, John and Peyton Bland (sometimes spelled Payton); her mother, Elizabeth Johnson, and her stepfather, Dick Johnson.”

William Clark received a section of land from the Lorenzo de Zavala grant. He later purchased an additional parcel of land to extend his property from near Adams Bayou on the west to Jack’s Island on the East then South to present day I-10. He put this land in his wife’s name, which is said to be an unusual thing to do in that time.

William and Caroline Clark built a log cabin on what now is called “Clark’s Lane,” (named later for another family of Clarks). At that time, however, it was situated near the trail that led to Newton County. They had three children: Oliver, Robert (born in Orange County on Oct. 30, 1840), and Rachel.

The elder Clarks lived in the log house for the rest of their lives. They were buried in the Block Cemetery.

At their deaths, the William Clark survey was left to their oldest son, Oliver Clark, whose descendants still live in the Mauriceville area.

Caroline Bland Clark’s property was left to the younger son, Robert F. Clark. Caroline died without leaving a will, and since her estate had a $600 indebtness against it, Clark had to sell the land to pay it off. 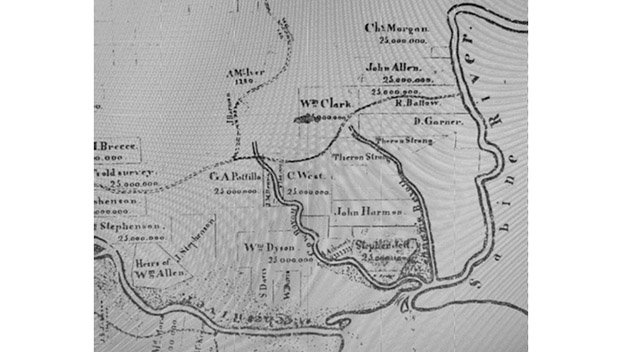 A map of the original land grant photo is pictured. (Sierra Kondos/Special to The Leader)

Oliver and Robert Clark were conscripted for service in the Confederate Army, but Oliver refused to go and eventually was used as a scout to lead Confederate troops through the swamps of the Sabine River. Robert agreed to go and served in the Southern army until he contracted pneumonia and was treated in Atlanta. During his absence, his wife and baby died; they are buried in the Wilkerson Cemetery near Mauriceville.

“The family story about Oliver Clark is while he was stationed at Galveston Island, his General told him that he was going to take his horse and saddle and make Clark walk,” Gene Clark said. “Oliver told him “No, you’re not. Me and this horse came here together and will leave together. And the story goes that he held the General at gunpoint, then jumped the horse into Galveston Bay, deserted the army and hid out. The army never did catch him.”

Oliver died in 1901, and the saddle was passed down to his son, Paten.

“That’s my daddy’s grandfather,” Gene Clark said. “He died in 1964 before his son, Pate was born. My dad, Wilbur W. Clark Sr., eventually moved to Newton County and was handed down the saddle.”

In 1997, Wilbur repaired the saddle after it sat in the barn for 33 years.

“He stripped the leather off to the wood structure,” Gene Clark said. “It is a piece of our history and he wanted to give it a new life.”

The saddle was then passed down to its present owner, Gene Clark.

Nice to meet you, Mr. Clark

“We would greet each other as Mr. Clark, respectively,” Stephen Clark said. “But one day we stopped joking about it, compared notes and realized we were kin.”

Stephen Clark has created a family tree by using Ancestry.com.

“Stephen began ticking off names, and I said, ‘wait a minute,’ those are the names I knew,” Gene Clark remembers. “My dad had names backed up from Ireland, so I could go back that far, and they were his family members, too.”

Stephen Clark and Gene Clark’s goal is to find James William Clark Jr.’s grave site, take a photo and submit it into their genealogy tree.

There is a book to chronicle the saddle’s history.

“In the late 1990s, Wilbur discovered James William Clark Jr.’s gravesite on Clark Circle located off I-10, in Orange, Texas,” Gene Clark said. “All we want to do is take a photo and add it to the Clark family tree.”

— Sierra Kondos is a freelance journalist and historian.