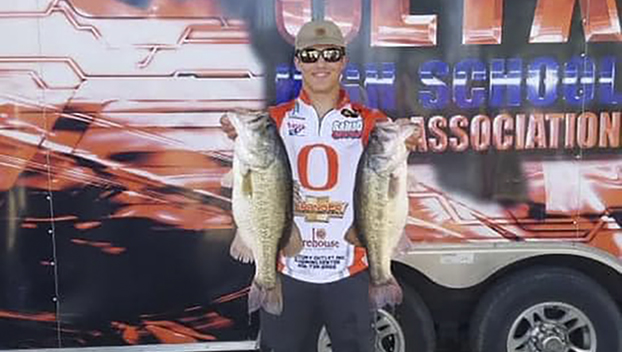 Orangefield’s Tyler Shearin had a huge outing on Rayburn as he finished second in the team competition and also caught the second heaviest fish. (Photo courtesy Orangefield Bass Team)

The senior Shearin posted a five-fish total of 24.54 pounds to finish second in the team field. He fished with his father Lee, while normal partner Kameryn Henderson was at a college event.

Shearin also had a 10.05 kicker, which was also the second biggest fish caught in the tournament.

Orange County had four more teams finish in the top 15.

LC-M’s Cameron Dougharty and Braxton Rambo were fourth with 20.67 pounds.

Vidor’s Tanner Jordan and Logan Killough were sixth with 18.75 pounds.

LC-M’s Jacob Longlois and Tanner Stewart were eighth with 17.58 pounds, and Bear teammates Will Henson and Garrison Byerly were 15th with 14.21 pounds.